GST Updates
7 GST updates for the month of January
by Vaishali Dedhia in GST Updates
Publish on January 10th, 2020 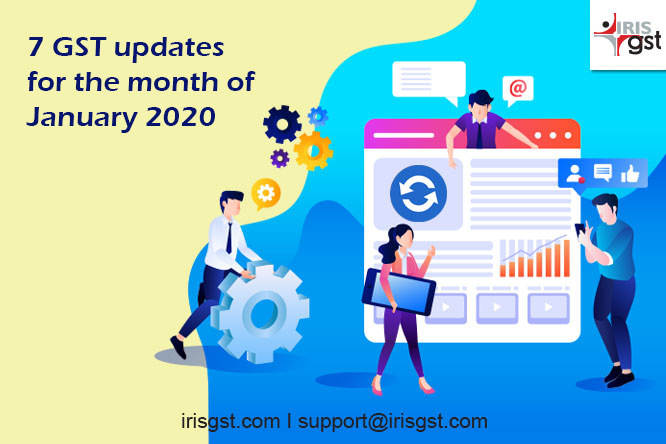 With the arrival of the year 2020, GST is all set to pace up with some crucial updates. These updates are being brought into effect to simplify GST compliance, curb tax evasion, and, improve the GST filing ratio.

The main highlight of the year 2020 is going to be the new GST returns. The new returns shall introduce new and simplified forms GST Ret 1, Ret 2 and Ret 3 along with annexure form GST Anx 1 and Anx 2. Unlike the current filing system, the new forms shall be uploaded on a real-time basis, and backed with eInvoicing mechanism, it is expected to partially automate the form preparation process.

However, these returns forms will be introduced from the month of April 2020. Thus, going by a chronological sequence.

List of important updates and amendments for and from the month of January:

1. eInvoicing system is made available on a voluntary basis

The eInvoicing system has been made available on a voluntary basis for businesses with an aggregate turnover exceeding INR 500 crore. Under the eInvoicing system, a taxpayer can generate an eInvoice from any accounting/billing software of his preference. However, the generated eInvoice will be considered valid only once it has been reported on the IRP portal and a unique IRN number has been issued to it.

2. GST Collection crossed 1 lakh crores for the month of December

The GST collection for the month of December was INR 1.03 lakh crores. This is the 2nd consecutive month where the GST collection has exceeded 1 lakh crores, indicating the stabilisation of revenue collection, credits to the anti-evasion measures introduced by the government.

Sabka Vishwas LDRS is a dispute resolution and amnesty scheme under GST that came into force on September 1, 2019. The day to avail the benefits of the scheme was December 31st, 2019. However, considering the taxpayer response to the scheme, the central government has extended the same for a period of 15 days i.e. until January 15, 2020.

4. Aadhaar to be made mandatory for GST

The GST Network has decided to make Aadhaar authentication or physical verification mandatory for new dealers from January 1, 2020, to keep malpractice in check. This is because there are currently 66.79 lakh new dealers registered under the Goods and Service Tax who are contributing to just 15% of the total revenue under the tax regime.

The 38th GST Council waived off the late fee for unfurnished GSTR 1 form for the period between July 2017-November 2019, if the same is filed on or before January 10th, 2020. Henceforth, if a taxpayer does not file his GSTR 1 for 2 consecutive filing period, his/her EWB system will be blocked.

Accordingly, the changes in the application software and the offline tools are now made available on the GSTN portal. The GSTN has resolved the following two issues as per press note:

7. GSTN has enabled a Statistics column under downloads section for the taxpayers to access data

The GSTN has enabled a Statistics column under the download section. By clicking on the relevant tab, a taxpayer can access the following data from the statistics option are as under.

IRIS GST, one of the leading GST Suvidha Provider (GSP) in India, is a one-stop solution for your GST Compliance (IRIS Sapphire) and E-way bill (IRIS Topaz) related issues. For any queries or to know more about our GST Compliance solutions, kindly drop us a mail at support@irisgst.com.