The e-invoicing system is accessible to taxpayers via APIs-Application Programming Interface. The E-Invoice APIs are used to interact and exchange the data between Taxpayer/GSP systems and the e-Invoice system. The data that is exchanged is always encrypted and the RESTful APIs are exposed over the SSL (Secure Sockets Layer).

This article was first published on January 07 2020, however considering multiple updates in the e-invoicing arena, we have edited the article with current updates.

The e-invoicing system is accessible to the taxpayers via APIs which provide the mechanism of sending and receiving data from the taxpayer. While taxpayers above ₹ 500 CR can directly connect to the Invoice Registration Portal (IRP) via e-invoice APIs (subject to complying with the technical pre-requisites), all other taxpayers can connect via GSPs(GST Suvidha Providers) or ERPs.

Companies with turnover Rs. 500 Cr and above

This category of taxpayers can connect to the GST E-Invoice system via 3 methods:

Companies with turnover below Rs 500 Cr

This category of taxpayers can connect to the E-Invoice system via 4 methods:

Taxpayers need to send invoice details to the IRP based on the notified list of data fields for e-invoicing need. The e-invoicing fields are specified in

From technical perspective, the data is be uploaded as per the e-invoice API specifications of IRP system. There have been several releases of the E-Invoice Specification which are covered individually below. However, for easy execution, all the current E-invoice APIs are summarised in the image below: 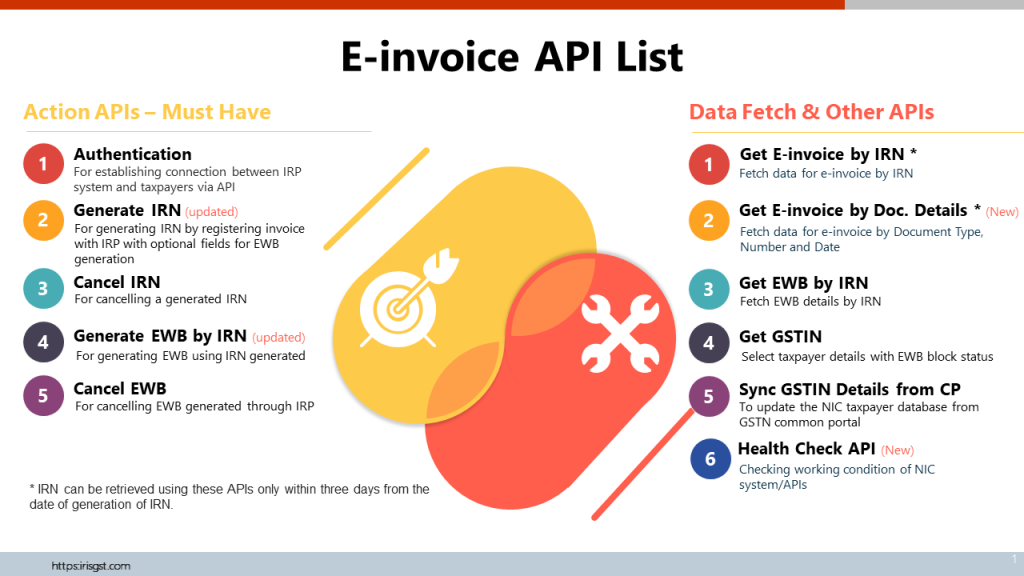 As the companies started using the portal with live data, several discrepancies in data fields, validations and fields specifications were noticed and hence a revised API Version 1.1 was released in March 2020.

Key changes in New E-Invoice API Specification and its impact

In addition to field level changes, there were some validation rules worth noting, for the impact it could have on the business processes –

Version 1.02 of  E-Invoicing API specification was released on 14th May 2020 on sandbox. The specification mostly had changes related to validation and new e-invoice API to generate EWB by IRN. With the new E-invoice APIs, E-way Bill generation flow was enabled. Thus, while sending invoice details for IRN generation, if transport details are included, E-way Bill Number (EWB) gets generated. The APIs available for the e-way bill are:

There is no data field related changes in new e-invoicing API specifications, however, the additional validation rules have been included.

The E-invoicing API specifications are available at e-invoicing Sandbox