E-invoicing is mandatory for taxpayers having aggregate turnover above Rs. 100 Cr from 01st Jan 2021 | GST Notification 88/2020

E-invoicing is mandatory for taxpayers having aggregate turnover above Rs. 50 Cr. from 1st April 2021 | GST Notification 05/2021

What are B2C Transactions?

Transactions involving supplies made to unregistered persons or consumers are generally referred to as Business to Customer (B2C) transactions. B2C Invoices are those invoices where the end-user will not be claiming Input Tax Credit (ITC) from GSTN. QR Code and B2C invoices became a topic of discussion after the e-invoicing revolution in India.

QR code gained popularity since the e-invoicing system went live. As per GST Notification 14/2020-Central Tax date. 23-03-2020, the government has made it mandatory for notified taxpayers (turnover over Rs. 500 Cr.) to display QR codes even on their B2C invoices. And as per GST Notification 71/2020-Central Tax dated 30-09-2020, the requirement of Dynamic QR Code on B2C invoices was deferred to 1st December 2020.

Along with E-Invoicing for B2B and Exports, taxpayers were mandatorily required to print self-generated QR Code on B2C transactions from 1st April 2021 onwards as per GST Notification 89/2020. However, the latest GST Notification 06/2021 released on 30-03-2021 stated that the penalty payable for non-compliance of QR Code on B2C transactions waived further till 30th June 2021, subject to compliance from 1st July 2021.

Notifications and Circulars related to B2C and QR Codes

IRN for B2C Invoices under GST

While B2B transactions i.e. invoices raised to a registered counterparty are explicitly covered under the current e-invoicing mandate as per GST Notification No.13/2020, it is equally important to understand the effect of e-invoicing under GST on various other business transactions like Exports, Deemed Exports, B2C, etc.

A schema for e-invoicing was released via GST Notification 60/2020-Central Tax dated 30th July 2020 followed by the release of version 1.03 of E-invoicing API specifications. Even though the mandate covers only B2B transactions, the e-invoicing schema notified includes all Invoice Types like Exports, Deemed Exports, and B2C transactions as well.

Although the notification on e-invoicing schema has included B2C transactions as Invoice Type, as per e-invoicing mandate and actual API released, IRN generation is not applicable for B2C. Hence taxpayers should not send the B2C invoices to the Government (i.e. IRP). This has been further clarified by NIC that the requests sent with B2C invoices will be rejected by them and if sent multiple times, then the IRN generation can be also be blocked.

Thus for B2C invoices, IRN generation is not required.

QR Code on B2C invoice is self-generated by the business and there are no standard specifications prescribed by the Government for this. The purpose of having a B2C QR Code is to facilitate digital payments and the RBI recommendations related to streamlining payments also need to be factored in while deciding the approach to define the QR Code for B2C transactions.

A QR Code based on the content included in it can be either static or dynamic.

How to generate a QR Code?

Inferring the various notifications and clarifications issued for QR code on B2C transactions, the following is the gist:

The RBI recommendation is to follow either of UPI or Bharat QR codes as these are inter-operable and standard QR codes. Businesses that have adopted proprietary QR Codes, will need to migrate to either of the standard codes by March 2022. Between the UPI and Bharat QR codes, the entity needs to decide about their approach. While UPI may be quick to implement, it may not support very high-value transactions. Bharat QR Code has the flexibility to include more content, however, the number of banks who have already implemented the option to issue QR Code is less than the banks that have UPI capabilities.

A brief comparative matrix is given below:

Contents of a B2C QR Code

Further, a dynamic QR Code should be such that it can be scanned to make a digital payment. IRIS is already live with the changes to include these fields in their B2C QR code.

Also, this QR code must be displayed on print and PDF invoices. The size of the printed signed QR code can be 2 X 2 inches. However, it depends on the available size on the invoice. But it should be readable from the QR code scanners.

In addition to the above point, there are four more points that are clarified in the circular. Here are the points:

As per this latest circular, they additionally provided one more clarification around this digital displayed QR code. If the taxpayer is providing digitally displayed QR code then on invoice copy as they are not printing QR code hence they need to provide cross-reference of these payments so that invoice shall be deemed to comply with the requirement of Dynamic QR Code

If payment is done before generation of invoice then taxpayer shall provide cross reference of these payments on invoice copy then invoice shall be deemed to comply with the requirement of Dynamic QR Code.

In cases other than pre-paid supply where payment is made after invoice generation then, in that case, it is mandatory to print the dynamic QR code on the invoice copy

If the taxpayer makes available to customers an electronic mode of payment like UPI Collect, UPI Intent, or similar other modes of payment, through mobile applications or computer-based applications, where though Dynamic QR Code is not displayed, but the details of the merchant as well as the transactions are displayed then on invoice if taxpayers provide the cross-reference of these electronic payments then the invoice shall be deemed to comply with the requirement of Dynamic QR Code.

However, if payment is made after invoice generation then it is mandatory to print a dynamic QR code on the invoice copy.

As per the notification, it shall apply to each supplier/registered person separately, if such person is liable to issue invoices with Dynamic QR Code for B2C supplies as per the said notification. In case, the supplier is making supply through the e-commerce portal or application, and the said supplier gives cross-references of the payment received in respect of the said supply on the invoice, then such invoices would be deemed to have complied with the requirements of the Dynamic QR Code.

In cases other than pre-paid supply i.e. where payment is made after generation/issuance of the invoice, the supplier shall provide a Dynamic QR Code on the invoice.

Let’s understand it on basis of the flow chart: 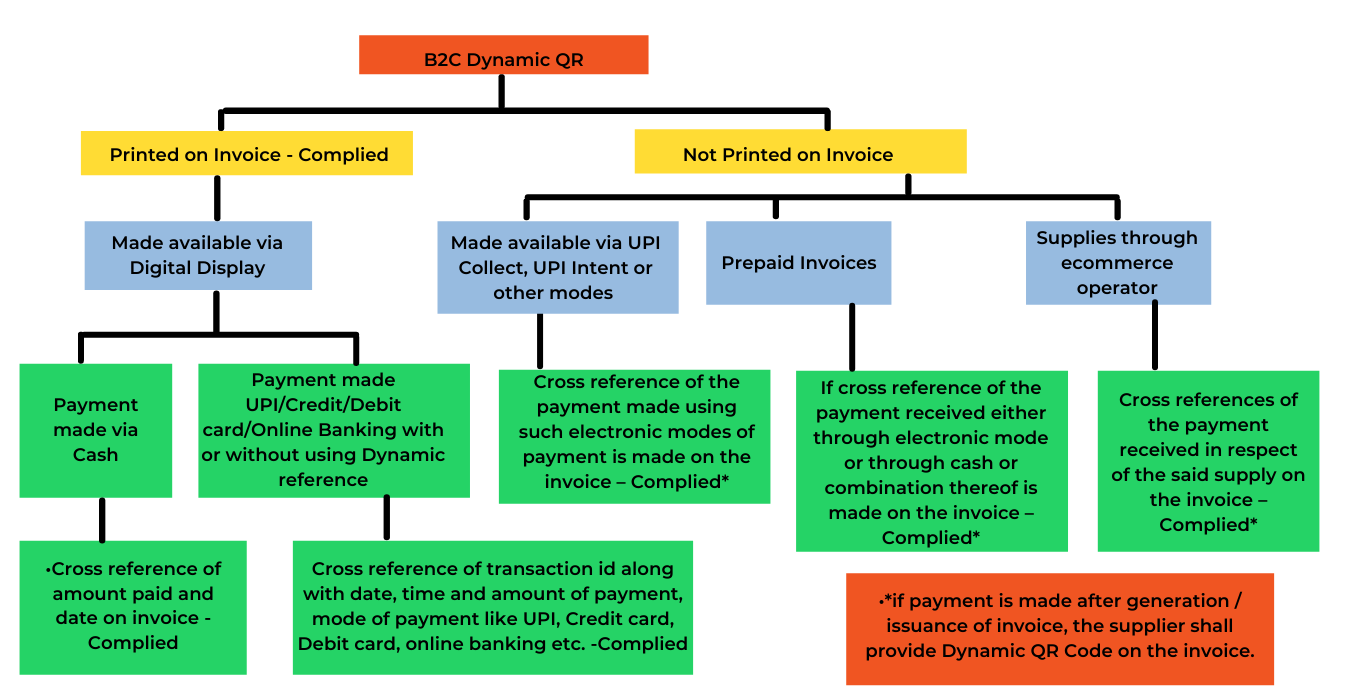 B2C Dynamic QR code is not applicable for the below cases:

B2C QR Code is not applicable to:

QR Code requirement had been notified under Income Tax Act and to be followed as per the conditions prescribed. Further with de-monetization, QR code has found its place even in the smallest of tea stalls to large retail outlets.

Notification of B2C under GST rules and the clarifications indicating dynamic QR codes has created quite a stir. Businesses need to weigh the options and keeping the timelines in view, maybe device a short-term and longer-term strategy.

In the case of digital display, is it compulsory to provide cross-reference even if the payment is made using a Dynamic QR code?

If Dynamic QR is printed in case of prepaid B2C invoices will it suffice?

If Partial Payment is prepaid and partial is after issuance of the invoice, then what should be done?

Payment app restrictions for amount, how it has to be handled?

If you are looking for Automated, Integrated, and Seamless E-invoicing Software, Try IRIS Onyx!

IRIS Onyx – has multiple options for Integration. It is a complete tool for a seamless e-invoicing process.

IRNs generated through any of the above approaches will be present on IRIS Onyx web portal also.

Onyx has proven to be a blessing for all our clients who managed to carry out the entire process of IRN generation smoothly. Our team has been dedicatedly helping clients with all their queries and has been conducting free webinars to spread awareness about the latest changes and extend support in the implementation of the e-invoice mandate.