E-invoicing
10 Things You should know about eInvoicing under GST
by Shilpa Dhobale in E-invoicing
Last updated on February 6th, 2020 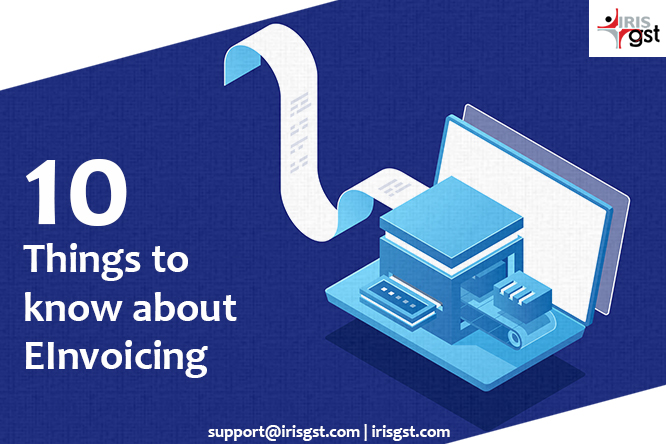 Starting April 2020, the eInvoicing mechanism shall be made mandatory for certain category taxpayers, based on their aggregate turnover. And to help these taxpayers get accustomed to the new system, the option to voluntarily generate and report eInvoice shall be made available for the given category in a phased manner i.e.

To further help you understand the eInvoicing system; here is a list of things you should know about.

10 Things to know about the new eInvoicing System

EInvoicing aka Electronic Invoicing is an electronic authentication mechanism under GST. Under the mechanism,all the B2B invoices generated by a business (agg. turnover >=100cr INR)will have to be authenticated on the GSTN portal, electronically. Furthermore, to manage these invoices, the Invoice Registration Portal (IRP) will issue a unique identification number for every invoice.

Once an invoice has been authenticated, its details shall be made available on the GST portal and EWB portal in real-time.

2. What are the benefits of eInvoicing?

Tax leakage and frauds using fake invoices have been an issue the government is trying to fight even before the GST era. eInvoicing is proposed to put an end to this by mandating authorization of every invoice from the government portal.

Besides plugging the tax leakage, the implementation of the eInvoicing system shall be beneficial for taxpayers as well.

Some of the key benefits are:

3. How to generate an eInvoice?

As per the draft format generated by the GSTN, an e-Invoice will contain the following parts-

EInvoice schema: This part will consist of the technical field name and the description of each field. It will also specify if a field is mandatory or not, and has a few sample values along with explanatory notes.

Masters: Masters will specify the set of inputs for certain fields, that are pre-defined by GSTN itself. It includes fields like UQC, State Code, invoice type, supply type, etc.

To know more about e-invoicing mandate book your seat today

5. What software/application can be used to generate an eInvoice?

As opposed to contemporary belief that an eInvoice has to be generated on the common portal, an eInvoice can be generated through any software/tool that supports the given e-Invoicing format.

6. What is the information required to generate E-Invoice?

7. Is there any official website for the eInvoice generation?

A taxpayer can use the following Common GST Electronic Portal to for the preparation of the E-invoice in terms of rule 48(4):

8. Is QR code mandatory for eInvoicing

Details included in the QR code

The QR code shall consist of the following details

9. Can amendments be made to an eInvoice?

Yes, a taxpayer can amend an eInvoice. However, the amendments can be done only on the GSTN portal.

10. Can a taxpayer cancel an eInvoice?

The taxpayer cannot cancel an eInvoice partially. The eInvoice is required to be cancelled fully and reported to the IRN within 24hours.

Any cancellation done after 24 hours of an eInvoice generation cannot be reported to the IRN portal. In such cases, the taxpayer will have to manually update/cancel the invoice on the GST portal before the returns are filed.