16th November 2020: The GST Network or GSTN will activate an automated system from December 1, 2020 that will bar non-filers of monthly GST return form GSTR-3B, irrespective of turnover limits, from generation of E-way Bill.

Starting December 02, 2019, the barring of E-way Bill generation in case of non-compliance for 2 consecutive filing period has been implemented on the E- Way Bill portal.

The rule puts restrictions on the furnishing of information in PART A of FORM GST EWB-01. The rule blocks GSTIN for E-way bill generation for taxpayers failing to file GST Returns for 2 consecutive periods.

As per the rule, if a consignor, consignee or transporter fails to file his GST returns for 2 consecutive months, his GSTIN shall be barred from generating E-way bills for the transportation of goods. Similarly, composite dealers who are required to file quarterly returns shall have their GSTIN barred from E-way bill generation if their returns have not been filed for two consecutive filing periods i.e. six months.

Why is GSTIN blocked for E-Way Bill Generation?

Many a time, a taxpayer is unable to file his GST returns, intentionally or unintentionally. However, due to these missing invoices, the buyer is unable to claim ITC for taxes he has paid. Furthermore, the blocking of GSTIN for E-way bill generation is also being touted as an Anti-evasion step to shore up the revenue and increase GST compliance.

So, can the blocked GSTIN be unblocked?

If your GSTIN has been blocked on the E-way Bill portal due to Non-Compliance, it can be unblocked as follows:

The GST Common Portal blocks the E-way Bill generation in absence of GSTR filing for 2 consecutive filing periods. However, as soon as the consignor, consignee or transporter files his GSTR 3B, the block status is automatically updated as ‘Not Blocked’ within a day in the e-way bill system and the taxpayer will be able to generate E-Way Bill once again.

This is how the system message is shown when timely GST filings are in place:

This is what the message is shown in case of non-filing: 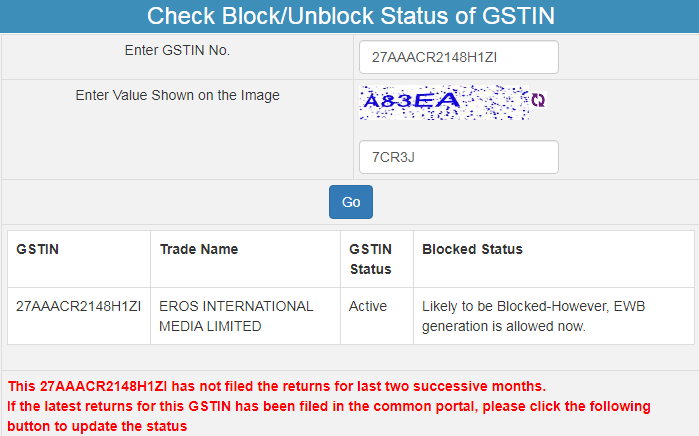 2. What to do if GSTIN is not unblocked automatically after GST filing? or How can GSTIN be unblocked immediately upon filing the GST returns?

Generally, the common portal automatically updates the blocking status of the GSTIN within a day’s time of GSTR 3B filing. However, in case you are still not able to generate E-way Bill, you can manually refresh the GSTIN block status on E-way bill portal as follows:

This will fetch the status of Filing from GST Common Portal and if filed, the status in e-way bill system will subsequently get updated.

If a taxpayer has not filed his return for more than the filing period, he shall receive alerts saying, “E-Way bill generation may be blocked after few days as you have not filed the last two months successive returns at GST Common Portal” while generating an E-way bill on the common portal.

But this alert message does not mean it will block or stop the taxpayer to generate an e-way bill. But if the taxpayer fails to furnish the GST return after the lapse of the due date then from next month onwards, such taxpayers will be blocked.

How many days does it take to unblock a GSTIN on the E way bill portal?

As a standard procedure, GSTIN will be unblocked within a day on the E way bill portal. Once the taxpayer files the pending GST Returns (GSTR 3B) on the GST Portal, e way bill portal will automatically be updated and seamless generation of the e-way bill will continue.

What if the GSTIN is still blocked, after filing the GST returns and also trying to update the GSTIN from the Common portal?

As a last resort, the taxpayer can raise a complaint about resolving the issue/case by contacting

For any GST related queries or to know more about our solution contact us.

There are 5 comments on this post
Leave a reply