The 41th GST Council Meeting was held on August 27th, 2020 chaired by Union Finance Minister Nirmala Sitharaman, via video conferencing. Since the pandemic has hit the country, States as well as the Centre are struggling hard to maintain the economy at balance. This meeting is crucial as the States are expecting solution from Centre over delay in compensation payments. 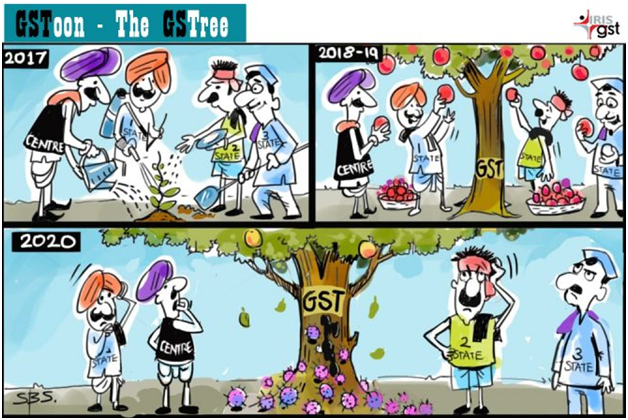 While the last meeting i.e. the 40th GST Council Meeting was more about providing relief to dwindling businesses hit hard due to the pandemic, the 41st GST Council Meeting one will concentrate more on the legal battle between the Centre and the State for Centre’s liability to compensate States.

The main agenda for the meeting was on the methods to compensate the states. The shortfall for the FY 2020-21 works out to be Rs 2,35,000 crore. Out of this, Rs 97,000 crore is the shortfall due to GST implementation, and the rest is considered as due to COVID-19.

The centre has given two options in the 41st GST Council Meeting to the states to meet the shortfall of the compensation cess. Here are the options:

The centre can aid Rs 97,000 crore to states as borrowings, through a special window by the RBI. This money can be repaid after 5 years on the collection of cess along with paying a reasonable rate of interest.

Option two is that the states can borrow Rs 2,35,000 crore directly from the RBI.

The states must evaluate both these options within seven working days when the GST Council will again meet to finalize the choices. If a state chooses the first option, the centre will enable compensation cess for later years too. If the state chooses the second option, there will be involvement of more amount of borrowing. This amount is to be paid by using the cess collected during the transition.

As is evident from the GSTN Report on GST Revenues, the public listed companies in India add the highest amount of Goods and Services Tax revenues for the government. These companies comprise a mere 0.62 per cent of the overall taxpayer base, but they contributed 35.29 per cent followed by the contributions of PSU companies at 9.12 per cent of the total GST revenue when they comprised only 0.02 per cent share in the taxpayer base.

However, the pandemic followed by multiple lockdowns has hit the businesses real hard. Following has been the GST Collection so far in the financial year:

The GST compensation cess for FY21 is seen at Rs 26,000 crore per month amidst pandemic. However, Centre has not released any compensation in this FY. These are typically paid on a bi-monthly basis.

It has been suggested by the Attorney General of India that there is no obligation on the centre under the GST laws to compensate for the loss of revenue on account of natural disaster, COVID, or economic slowdown, etc. as they are not related to the implementation of GST. The centre is of the opinion that there is a need to factor in the “abnormal situation” due to the coronavirus pandemic, which is described as an “act of God”, indicating that there was no insurance for 14 % growth in GST collections during these times. The situation calls for the enforcement of the force majeure clause since this is an event triggered by things beyond anyone’s control.

States led by the opposition will discuss the same in the meeting.

Hence, the GST council has to decide how to meet the shortfall in such circumstances and not the central government.

We will keep you updated with all the decisions made in the meeting and other updates released by the finance ministry via the IRIS GST Blog.

IRIS Business, a leading name amongst the GST Suvidha Providers (GSP) in India, offers easy and efficient GST solutions (IRIS Sapphire) and E-way bill (IRIS Topaz) compliance. For any queries or to book your free demo, connect with us at support@irisgst.com.