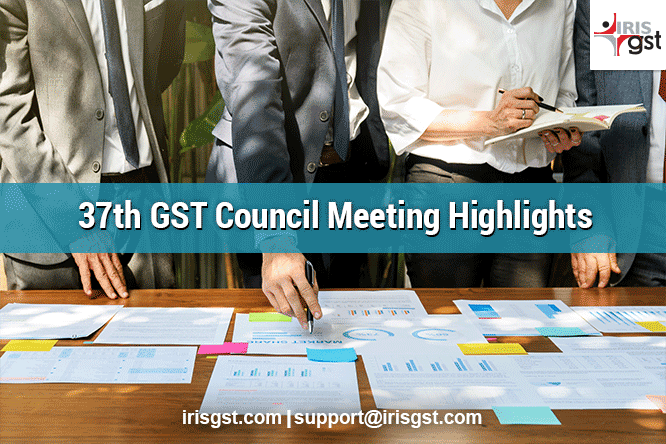 The 37th GST Council meeting was held on September 20, 2019, under the chairmanship of Union Finance Minister of India, Smt. Nirmala Sitharaman in Goa.  The council meeting concluded bearing good news for all the taxpayers.

The highlights of the 37th GST Council Meeting are as follows:

As per the 37th GST Council, Annual Return form (GSTR 9) has been made optional for taxpayers with an annual turnover below Rs 2 crores. Similarly, Annual Return for Composite Dealers (GSTR 9A) has been completely waived off for the given fiscal years. However, taxpayers with an annual turnover Rs 2 Crore and above will still be required to file their annual returns, along with GST Audit in form GSTR 9C.
A committee of officers shall be constituted to examine and simplify annual GST return form.

The GST Council has also revised the rates applicable on the following goods and services:

The 37th GST Council has reduced the GST compensation cess on the motor vehicles with a capacity of 10-13 people. The automobile manufacturers and dealers will now be required to charge as follows:

The New GST Return filing system under simplified GST regime was supposed to be implemented in a phase based manner from October 2019, will now be introduced with the upcoming financial year i.e. from April 2020. Thus, taxpayers will be required to continue filing their GSTR 1 and GSTR 3B until March 2020.

Furthermore, in order to increase compliance of filing of GSTR 1 (outward supplies) a proposed restriction shall be applicable on availing ITC by entities who do not file GSTR 1.

The GST Council has recommended the following changes in terms of refunds under GST:

The following services have been brought under Reverse Charge Mechanism

The following goods and services have been exempted from GST as per the 37th GST Council meeting:

Prior to the meeting on 20th September 2019, the follows was being expected from the 37th GST Council Meeting:

The automobile industry has requested a GST rate cut from 28% to 18%, in a prospect of attracting customers in the upcoming festive season. While the government is keen on the same, this may result in huge revenue loss.

The Fitment Committee, a panel of officials of the GST council that examined the implications of a GST rate cut suggests that reduction in tax rate will bring down collections by over Rs 20,000 crore. Quoting one of the senior finance ministries, “if it (GST rate cut) is done for one sector, it can open floodgates. We should not forget the revenue situation.” This probably lowers the chances of bringing GST rate related discussions in the upcoming council meeting.

The 37th GST Council Meet is expected to review the current and new return filings as well as focus on the phased introduction of new return forms. Furthermore, the council may also review penal proviso against non-filers, including debarring of Eway Bill issuance.
As per the statistics so far, on an average 20 per cent assessees do not file the return within the given due date which affects overall revenue collection.

3. ITC treatment in the healthcare sector

Owing to the absence of input tax credit (ITC), several hospitals have claimed an approximate 8% drop in their yearly profit margin. As these hospitals (excluding cosmetic surgeries and hair transplants) are exempt from GST charges, they cannot claim ITC, which eventually leads to an increase in the cost of inward supplies. Thus, these healthcare units have requested the finance ministry for an output GST of 5% on such taxable services without ITC. GST council might consider the same for a discussion in the upcoming GST council meet.

Although the finance ministry has scaled down the GST collection target from Rs 7.61 lakh crores to 6.63 lakh crores, (likewise, with the State GST combined, i.e. from 1.14 lakh crores to 1 lakh crores, based on the interim budget). The ministry aims to increase revenue collection and avoid a fiscal deficit. Thus, the Council is likely to consider the same for the discussion as well as initiate additional steps to bring down tax evasion.

The upcoming GST meet is likely to approve a single authority mechanism for exporters to sanction and process GST refunds for exporters in a faster and simpler manner. As of now, state and central officers separately settle SGST and CGST refund claims, making the procedure complex, which has further led to piling of Refunds of around Rs 10,000 crore.

The lottery industry has been requesting for a uniform GST rate of 12 per cent and removal of tax on the prize money as the duel rate (12% for lotteries sold within state and 28% for the ones sold outside) is hampering the growth of the business. The Council in its July meeting had also decided to seek legal opinion from the Attorney General on the issue and the same might be considered for a discussion in the upcoming GST Council meeting.

Biscuit Manufacturers Welfare Association (BMWA) has written to Finance Minister Nirmala Sitharaman seeking revised Goods & Services Tax (GST) of 5% for entry-level biscuits priced up to Rs 100 per kg.over the concerns of steady decline of affordable biscuit consumption over the past few months. Biscuits priced below Rs 100 per kg were exempted from excise before GST era. Currently, biscuits are levied with 18% GST.

Sectors such as hotels, cement and textiles are also hoping for some GST relief.

The GST Council is scheduled to meet on 20 September to consider tax revisions on various categories including biscuits and the auto sector.

9. No GSTR 9 filing for minimum threshold

Council is likely to waive off the mandatory requirement to file GST annual returns – GSTR9, GSTR9A and GSTR9C, for the financial year 2017-18, 2018-19 for taxpayers below annual turnover of Rs 2 crore.

The council may consider to introduce a special composition scheme and increase the GST rate from the current rate of 5 percent to 12 percent for taxpayers supplying brick kilns, sand mining activities and stone crushers.

IRIS Business, a leading name amongst the GST Suvidha Providers (GSP) in India, offers easy and efficient solutions for GST (IRIS Sapphire) and E-way bill (IRIS Topaz) compliance. For any queries or to book your free demo, connect with us at support@irisgst.com.