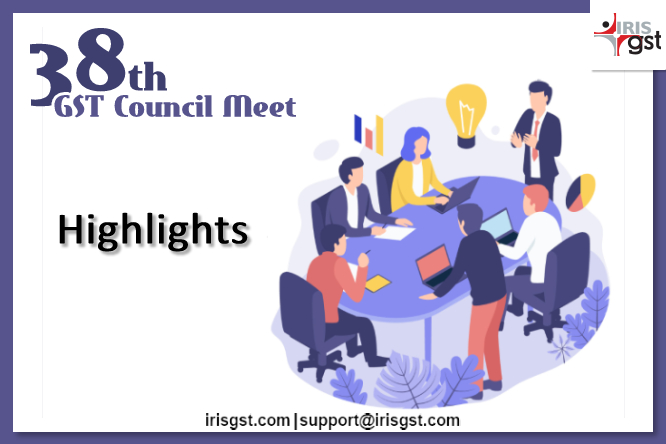 The 38th GST Council meeting was held on December 18, 2019, under the chairmanship of Union Finance Minister of India, Smt. Nirmala Sitharaman.

The key highlights of the 38th GST Council Meeting:

In order to improve the GSTR 1 filing, the GST Council has decided to waive the late fee for filing GSTR1 from July 2017 to November 2019, if the returns are filed before January 10, 2020.

However, the EWB generation for a taxpayer who has not filed their GSTR 1 for 2 consecutive filing periods will be blocked

Grievance Redressal Committees to be constituted at state and zone level to address the grievances of taxpayers. The committee to consist of CGST officers, SGST officers, representatives of trade and industry and other GST stakeholders like GST practitioners and GSTN etc.

Provisional ITC Claim in GSTR 3B to be restricted at 10%

The GST Council has decided that a restriction of 10% will be applicable on provisional ITC, if the taxpayer’s ITC data does not match with the vendor’s GSTR 1 data. Earlier the restriction was set to 20%. Read more on 20% rule here.

Standard Operating Procedure in case of Non-filing of GSTR 3B

A Standard Operating Procedure (SOP) will be issued for the tax officers to adhere in cases where GSTR 3B is not filed by the taxpayers. The SOP will guide the tax officers in terms of actions to be taken in case of non-filing of returns

For certain North-Eastern States, the due date for filing of few of the GST Returns will be extended amidst the increasing tensions.

1. Relaxing Requirements To Get Exemption On Long Term Lease

The decision based upon voting system, wherein 21 states voted in favour of uniform rate.

GST rates rationalised for woven and non-woven bags and sacks made of polyethylene to 18% The change shall become effective from 1st January 2020.

Discussions related to tax rate hike have been excluded from the meeting.

IRIS Business, a leading name amongst the GST Suvidha Providers (GSP) in India, offers an end to end and efficient solutions for GST (IRIS Sapphire) and E-way bill (IRIS Topaz) compliance. For any queries or to book your free demo, connect with us at support@irisgst.com.

Below is a list of Expectations from the 38th GST Council Meet:

In the last two months, the FM Smt. Nirmala Sitharaman has held talks with various stakeholders to analyse the possibilities and functionalities available for the new return system. Also, learning from the drawback of the current system, the Ministry has shown a keen interest in the developments of the new system on the GSTN portal.

To further ensure taxpayer’s convenience, December 7th 2019 was observed as GST feedback diwas, wherein inputs/feedback from taxpayers across the nation was sought. Currently, there are a host of procedural complications foreseen under new GST returns. Fine-tuning the filing process and minimising the complications in the new return system is highly expected from the upcoming council meeting.

Despite various preventive measures taken by the GST officials, the revenue collection has been inconsistent in the last few months. Considering this downfall, the ministry might be required to re-evaluate revenue positioning under GST.

Furthermore, the GST council may focus on the central government’s undue delay of 4 months in paying off its states’ compensation cess. While many producing states that are losing revenue, are of the opinion of including an alternative mechanism to cess for compensation. Other states including Chattisgarh has written to the ministry for an extension in the compensation period from 2021-2022 to 2026-27.

Re-adjustment of the GST rate slabs has been the major talk of the town, lately. In a bid to raise the GST revenue, the GST council may consider upon increasing the existing 5% slab to 6% to 8%. Currently, the 5% slab includes household necessities such as edible oil, sugar, spices, tea, coffee, coal, sweets, medicines, basic clothing and footwear. furthermore, the GST council may also bring certain GST exempted and nil rated commodities under the taxable bracket.

In order to balance this increase in the GST rate, it is expected that the GST council may bring down the total number of tax slabs to 3, from the current 5 slabs.

Non-compliance is one of the major factors that influence GST Revenue. In order to ensure taxpayer adhere to their GST filing, various measure have been suggested to the GST Council. One of these measures includes the Amnesty Scheme (late fee waiver) for non-filing of GSTR 1.

As per the one-time Amnesty Scheme, taxpayers will be allowed to file their GSTR1 due from July 2017 to November 2019 without any penal provisions, if the given dues are cleared before 10th January 2020. The Council may consider approving the same in the upcoming council meet.

In order to ensure taxpayers file their monthly returns, GSTIN blocking functionality was introduced on the EWB portal. According to this rule, if a taxpayer has not filed his GSTR 1 or GSTR 3B for 2 consecutive filing period, his GSTIN will be blocked on the EWB portal for EWB generation. The council is likely to deliberate on continuing this functionality.