COVID Resources
COVID-19 – What Government can do to Nurse the Economy Back to Health
by K Balachandran in COVID Resources
Publish on April 7th, 2020 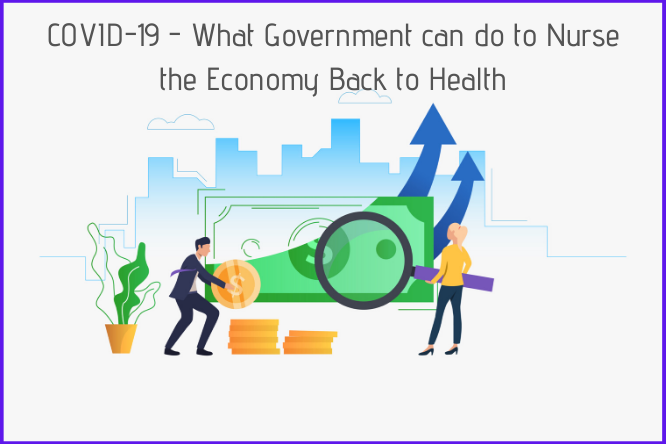 Morbid as it sounds, this is the season for ventilators. As the world fervently grapples with the Corona virus outbreak, the engine of the economy has sputtered to a halt and many a business is gasping for breath.

These are extraordinary times. The hapless Indian MSME sector, already bedeviled by a credit crunch, is set for an unimaginably rough ride with the government clamping a nationwide lock-down that would grind the supply chains to a halt and drastically crunch demand. No one is sure at this point of time when normalcy would resume.

While obviously the first priority is health care and saving lives, if businesses shut down en-masse, the economy might take years to recover and the social costs would be prohibitively high.

We have been, hopefully, proactive in battling the virus, can we be equally so in taking care of the micro, small and medium businesses? In short, we need business ventilators in operation which will pump in funds to enhance staying power.

Here is a short prescription the government could consider.

1. Defining MSME on the basis of turnover: Firstly, it would greatly help if the definition of an MSME changes to turnover based instead of the existing rather antediluvian fixed asset criteria. Our economy is predominantly service oriented and this definition just does not make much sense. There is already a bill which has been in the works for quite sometime. We should pass this in the parliament, pronto. Currently, a large number of enterprises fall outside this definition and are denied benefits of government-initiated programs.

2. Organizing MSME into segments: Secondly, actionable data can emerge if we get the existing silos organized so as to meaningfully segment the MSME sector. One could look in terms of GST registered business and non-registered businesses. The second way is to classify B2B and B2C businesses. Then there are those enterprises served by the banking sector, those who are financed by NBFCs and those which rely on personal loans. Another way is to bucket enterprises which are predominantly exporting and those which are selling in the domestic market. A good triangulation of GSTN and the MSME Udyog Aadhar database could make all this happen.

3. Prescription for Financial Boost: Now, this pandemic and associated economic havoc essentially calls for a financial reset. The RBI has mercifully pushed for a three-month loan moratorium. While this is necessary, it is hardly sufficient given the unfolding scenario and considerable uncertainty regarding when economic activities can resume full time. One educated guess would be when the virus is contained and a vaccine is visible in the horizon. Six months, one year – your guess is as good as anyone else including the government’s.

Firms need funds to stay afloat. Most in the B2B and export sectors are suddenly saddled with a huge receivables problem. One way is for the government to come out with an instrument similar to a working capital term loan that can be offered by banks to those enterprises with whom they have an existing relationship. The government can fund the banks with an earmarked fund line suitably structured as to not disturb the CRAR. Some of the banks can be asked to co-lend with NBFCs in specific sectors as well. This kind of facility should alleviate the pain endured by a good number of B2B segment enterprises with banking and select NBFC relationships.

Then there are a huge number of small firms in the B2B supply chain who fall under the reverse charge mechanism in the GST supply chain. They are not GST registered and the buyer pays the GST in bulk on behalf of these suppliers. Many of these suppliers depend on one or two big buyers for a bulk of their business. Would it make sense if the government pushes through a financing scheme which helps the micro B2B enterprises through the big, established buyers in the chain, of course, with an adequate KYC process? GSTN registration with an annual simple filing would be one option to nudge them towards formalization.

Finally, at the bottom of the pyramid we would find a huge number of predominantly proprietorships which would not have a GSTN registration, no banking relationships and pretty much manage their finances through personal loans. Most of them would be in the B2C space as well. I would tend to think that a number of these enterprises would be Mudra beneficiaries. The government could address the needs of existing Mudra beneficiaries (with a good payment record) through a structured and targeted financial assistance.

We hear a second economic package is in the offing from the Finance Minister. May be the time has come to change the playbook.

A co-founder of IRIS, Balu (or Balu Sir, as he is known) wears two hats – one as the CFO and the other as the head of the consulting, research and information practice at IRIS. He is closely associated with the DCP business line as one of the executive sponsors and leads development of new use cases for structured and unstructured data. Prior to founding IRIS, Balu was with CRISIL as group leader and senior analyst, and with Tata Economic Consultancy Services as a business economist. Balu has represented IRIS at various fora such as the IFRS Taxonomy Consulting Group of the International Accounting Standards Board (IASB); the XBRL sub-committee of the Ministry of Corporate Affairs, Govt. of India; the steering committee on fraud prediction models, Serious Fraud Investigation Office, Govt. of India and the XBRL International plenary. He holds a graduate degree in chemical engineering and an MBA from Indian Institute of Management, Bangalore. Famed for his humor which holds the teams together in moments of crisis, Balu enjoys dabbling in the stock markets, reading Malayalam literature, tracking news and events. He is a committed practitioner of yoga, and outside of work enjoys spending time with his wife and two daughters. - Co-founder and CFO, IRIS Business Services Ltd.