IRIS Onyx an Automated, Integrated, Complete E-Invoicing Solution is all set to ease your E-Invoicing compliance from 1st Oct 2020. Feel free to connect with us at support@irisgst.com 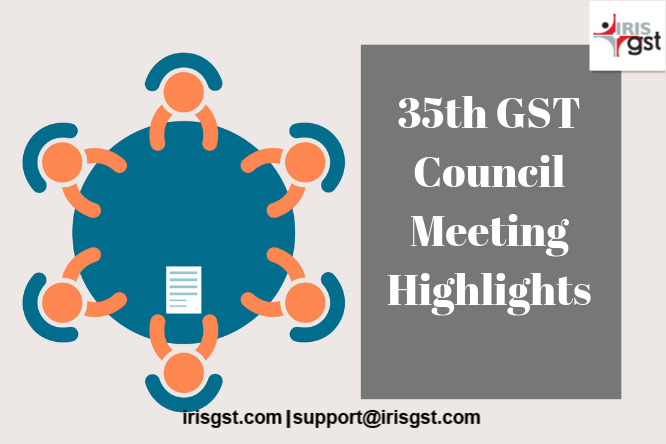 The GST Council is scheduled to meet for 35th time under GST regime on 21th June, postponed from the original date of June 20. The 35th GST Council Meet will be chaired by Mrs. Nirmala Sitharaman, the new Finance Minister of India. Being held after a gap of three months, the following updates/announcements concerning the indirect tax issues can be expected from the GST Council Meet.

Six things to expect from the 35th GST Council Meet

Simplified GST returns – Clarification for ITC
While the CBIC has released the long awaited transition plan for the implementation of the new GST Return System, the taxpayers in India are still in a fog with regards to various aspects of simplified return system. Thus, a detailed clarification concerning the working mechanism of new simplified forms during and post transition period can be expected from the GST council meet. [For instance claiming ITC during the transition periods, wherein the user is required to file GSTR 1 & GSTR 3B along with ANX 1 (on trial basis)]

E-Invoice Mechanism:
In order to curb GST tax evasion, the finance minister is likely to finalise the threshold limit of turnover fore entities who are required to generate E-invoices. This is currently been suggestive towards 50 crores per annum. This system will also help to overcome the gaps between GSTR-1 and GSTR-3B and would ensure that the input tax credit does not get misused.

EWB Geotagging:
The agenda for the 35th GST council might also include implementation of Geotagging or NHAI’s FASTag, the electronic toll collection system, into GST E-way Bill system. The FASTag uses Radio Frequency Identification (RFID) technology for direct toll payments from prepaid accounts. This can be used to monitor the movement of goods and help stop tax evasion in the nation.

Centralised AAAR:
The GST Council might also consider setting up a national bench for Appellate Authorities for Advance Ruling (AAAR) to ensure orders passed by state AARs do not contradict. Furthermore, setting up a national bench will also bring certainty to the GST regime by eliminating the chances of diverging rulings on varying tax implications.

Tax Cut:
Some states, worried about the ‘demand slowdown’ and ongoing GDP growth deceleration are favouring tax reduction in the 28% tax slab. As of now the 28% tax slab consists of 28 goods, which might receive a slash in upcoming council meet. The FM might also consider slashing the GST rates on electric vehicles from their current slab of 12% to 5%.

NAA Tenure extension:
The National Anti-Profiteering Authority came into existence on November 30, 2017, for a tenure span of 2 years, to ensure companies pass on the tax benefits laid down by the government to their consumers. While the NAA roughly has 5 month left under its tenure, the profiteering complaints are yet to stop. Thus, FM might give NAA an extension of one year until November 30, 2020 in the 35th GST council meeting,

While the period from 2017-2019 focussed on setting up a scalable and stable framework for a taxation system as elaborate as GST, we expect the Modi 2.0 era will focus on simplifying taxation process and to stop tax evasion.

IRIS Business is a leading GST Suvidha Provider (GSP) providing an easy and efficient solution for GST (IRIS Sapphire) and E-way bill compliance (IRIS Topaz). To have your GST queries solved and to know more about our solution, please contact us at support@irisgst.com.