We are back with Day 2 of our #21DayLokdownChallenge! Today we have a very special practise – Shalabhasana that has multiple health benefits. In #EverythingGST we talk about Interest, Late Fees and Penalties and our book of the day is ‘I Will Teach You To Be Rich’ by New York Times bestselling author Ramit Sethi. So wait no more, dive in!

Please Note: In the image, the legs are lifted a little more than required. You just lift your legs up to 30 degrees only. Not too high without bending them in the knees.

It is advisable to perform all the asanas on a yoga mat or a sturdy mat that is not slippery.

Step 1: Lie down flat on your stomach in the initial relaxation posture.
Step 2: Bring your right leg in the centre then the left. Now, both your feet, heels, knees and thighs are together. Put your hands close to the body facing the ground.
Step 3: Put your chin on the floor. Raise both your legs up to 30 degree keeping your knees straight.
Step 4: Maintain for 3 to 5 breaths or as per your capacity. And then slowly bring your legs down to relax. Avoid jerks. Repeat for 2 to 4 times as per your capacity.
Note: If you are not comfortable to raise both the legs then start with Ardha Shalabhasana i.e. raising just one leg at a time. And for Purna Shalabhasana you can take support of your fist by putting them in your groin area for comfort. 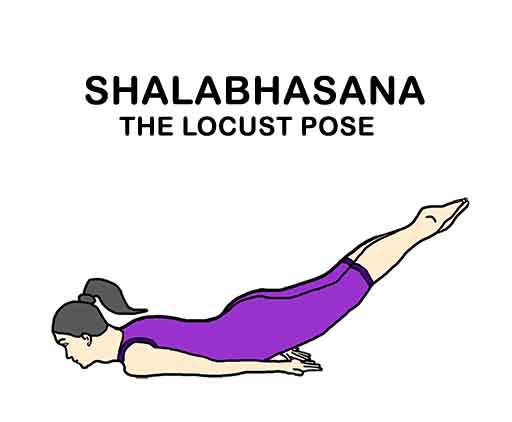 Avoid if you have Hernia, hyper tension, peptic ulcers, heart problems, or have undergone any recent surgery. Women during pregnancy must avoid. Regular practice of Shalabhasana can give you the following benefits:

Refer below blog for interests and late fees: https://irisgst.com/gst-form-ret-1-how-to-file-table-5-to-table-8/

Sub-section (1), sub-section (2) and sub-section (3) of Section 122 of CGST Act, 2017, explains certain offences under which penalties are attracted.

Make supply of goods or services:

Following offences relate to section 122 (1) (v) and 122 (1) (vi) respectively. Accordingly, such offences originate if as a taxable person;

Following offences relate to section 122 (1) (vii) and 122 (1) (ix) respectively. Accordingly, such offences occur if as a taxable person, you:

Following offences relate to section 122 (1) (xiv) and 122 (1) (xviii) respectively. Accordingly, such offences occur if as a taxable person;

Penalty Levied: in case of any offence mentioned above, you shall be liable to pay a sum which is higher of:

Following offence relates to section 122 (2). These provisions refer to you as a registered person if you supply goods or services on which:

Hence, if you are such a supplier who makes a supply for any of the following two reasons, the penalties attached would be levied.

Firstly, for reasons other than fraud, wilful misstatement or suppression of facts to evade tax. In such a case, you as an offender shall be liable to pay a penalty which is higher of:

Secondly, for any reason of fraud or wilful misstatement or suppression of facts to evade tax. In such a case, you as an offender shall be liable to pay a penalty which is higher of:

Following offences relate to section 122 (3). These offences deal with the situations where you are not directly involved in tax evasion. Instead, you aid or abet or may be a party to such an evasion. Furthermore, it also includes cases where you do not attend summons or produce documents.

I. Accordingly, those cases are as follows:

Penalty: If you as an offender commit any of the above offences, then you shall be liable to pay a penalty which may extend to Rs 25,000.

Under the CGST Act, 2017, section 123 deals with circumstances where you fail to file an Information Return under section 150.

Penalty: If you fail to file IR within stipulated time, you shall be liable to a penalty of Rs 100 each day for which the failure continues. Such a penalty cannot exceed Rs 5,000.

Section 124 of the CGST Act, 2017, deals with penalty levied in circumstances where you fail to furnish information under section 151.

According to section 151, a Commissioner has the power to collect statistics concerning any matter dealt with under the Act.  He may issue a notice asking you to furnish information or returns in a prescribed format. Such information relates to the matters for which statistics are to be collected.

Penalty: If you fail to furnish such information, you shall be liable to a fine of up to Rs. 10,000. But where the offence is continuing, a further fine of Rs 100 is levied each day for which the failure continues. However, such a penalty cannot exceed Rs 25,000.

Section 125 of the CGST Act, 2017, deals with such cases where no separate penalty is prescribed under the Act or Rules. Accordingly, it refers to cases where you contravene

Provided, there is no penalty separately prescribed for such an offence under the Act.

Section 132 of the CGST Act, 2017 describes cases of tax evasion and the penal actions applicable on specific events. This section provides for cases where your offences lead to prosecution and accordingly a punishment is initiated on you. The term prosecution means conducting legal proceedings against an offender before a legal tribunal. And the punishment for such an offence involves either imprisonment or fine or both.

A. This part enumerates cases identified by law makers as offences liable for prosecution:

I. Attempting or abetting the commission of any of the offences mentioned above.

Now, this section enables commencement of prosecution proceedings against the offenders. It also lists the period of imprisonment and quantum of fine for all such prosecution offences. Such a punishment varies depending on the amount of tax evaded or seriousness of the offence as listed below.

B. This part deals with persons committing any offence specified in clause (vi), (vii) or (x) above. Such offenders shall be punishable with:

There are cases where you are convicted of repetitive offences. And such offences without any specific/special reason are to be recorded in the judgment of the Court. Such offences will entail an imprisonment term of not less than 6 months. But such imprisonment could extend to 5 years plus a fine.

D. All offences mentioned in this section are non-cognizable and bail able except the following cases:

(i) Where the amount exceeds 5 Crores and

Title: I Will Teach You To Be Rich This was Day 2 of our #WFHPositivityDossier. Coming up we have lots more interesting stuff so stay tuned!!