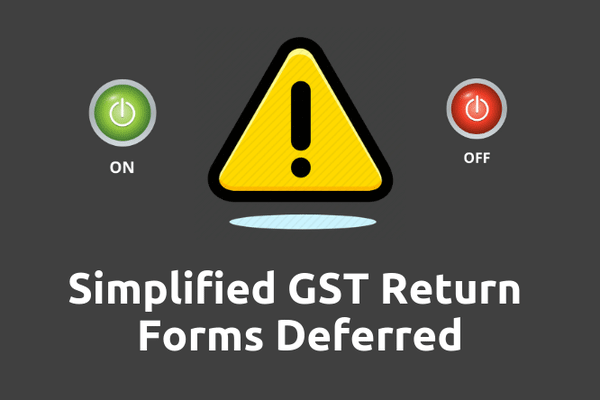 One of the changes expected with the dawn of new Financial Year was the introduction of New returns envisaged to reduce compliance burden of taxpayers. The pilot for New Returns- Sahaj and Sugam, was to start from April 1, 2019 and the mandatory filing to start from July 2019.

However, same has been deferred till the new forms are available on the portal and the software is ready.

The 27th GST Council Meeting held in May 2018 proposed simplification of GST Return filing which aimed for single return filing for most of the taxpayers. The roll-out was expected to happen over a period of a year to reduce the burden of the taxpayers and ease out the filing process. It aimed to monitor and devise other mechanisms to keep a watch on reporting of fraudulent transactions.

The draft forms were released in July 2018 in the 28th GST Council Meeting. The new returns were designed for businesses registered as regular taxpayers. For the other taxpayers such as Composition Dealer, ISD, TDS deductor, E-commerce operator etc. these returns did not apply.

Though in existing scenario, there is no terminology-based bifurcation, the tax-payers are segregated on the basis of turnover. In the new GST return regime, the taxpayers will be bifurcated as Small and Large on the basis of self-declared turnover.

For the Simplified GST Returns for large (regular) taxpayers (Turnover more than Rs. 5 crore), there were major changes in terms of ITC claims and compliance. But from the point of view of data required to be filed in it, the old and new forms were almost similar with a few minimal exceptions. If GSTR2 was to be continued in the filing process, then single return vs the multiple returns filing would have been the only change between the two processes for

However, the small taxpayers (turnover upto Rs. 5 crore)  were to use Sahaj and Sugam.

These tax returns are being introduced to free the small taxpayers from the hassles of taxation; thereby helping them to focus on the growth of their business.

“The pilot project of new return filing has been deferred. The new date would be decided. The forms would be notified first; following which the pilot would be launched. Systems are being developed for the new forms,” an official said.

IRIS Business is a leading GST Suvidha Provider (GSP) providing an easy and efficient solution for GST (IRIS Sapphire) and E-way bill (IRIS Topaz) compliance. To have your GST queries solved and to know more about our solution, please contact us at support@irisgst.com.

Gautam Mahanty, VP, Business Development at IRIS, comes with 15 years of multi-national & cross-functional experience across Sales, Strategy, IT operations and Program & Project Management. Graduating in Mechanical Engineering, Gautam did his MBA from Xavier Institute of Management, Bhubaneswar. Gautam has been involved in the operations and delivery of several XBRL projects in IRIS. When not playing with him, enjoys wildlife and long distance running. He is also a deep spiritual seeker, and enjoys reading about, and visiting, places of spiritual significance.