E-invoicing
E-invoicing in India to Curb Tax Evasion
by Gautam Mahanti in E-invoicing
Publish on May 2nd, 2019 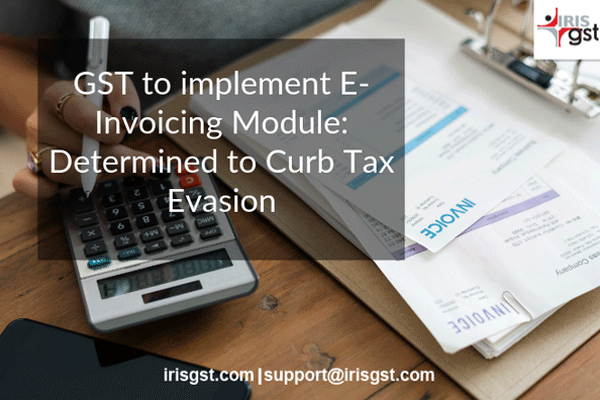 Updated on 5th Aug 2020:Version 1.03 of E-Invoicing API specification is released for testing on 05th Aug 2020 in the sandbox. The changes are in accordance with the revised version of e-invoice schema- Version 1.1, released via e-invoicing Notification 60/2020 of Central Tax dated 30 July 2020. For details on changes as per new schema, you can check on our blog E-Invoice LIVE Date: 1st October 2020 – Version 1.1 of E-Invoice Schema Released.

Updated on 14 May 2020: Version 1.02 of  E-Invoicing API specification were released on 14th May 2020 on the sandbox. The specification mostly has changes related to validation and new API for Generate EWB by IRN

E-Invoicing is increasingly mandated by governments across the globe particularly due to GST evasion. Tax leakage and fraud using fake invoices have been an issue the government is trying to fight even before the GST era. E-invoicing in India is proposed to put an end to this by mandating authorization of every invoice from the government portal. Real time invoice reporting discourages subsequent fraudulent changes/adjustments.

Ever since the introduction of GST in the Indian taxation system, GST officials have been diligent to work out a mechanism to stop tax evasion in India. Over the years, there have been instances wherein tax fraudsters have been caught using fake invoices to evade taxes or claim additional ITC. And such occurrence was only possible in the absence of a proper mechanism to tackle such a situation on a nationwide level. Thus, e-invoicing came into being! So, e-invoice generation and ITC Claim will go hand in hand. This may lead to lesser tax frauds in the near future.

Introduction to E-Invoicing in India
While mainly perceived as technical change and low impact for business users, the organisations need to take some key decisions for integrating e-invoicing in their routine business operations without major disruptions.  Aligning the business practices, choosing the best-fit solution and the right solution provider will ensure that e-invoicing seamlessly works for companies and is miles away from being an additional compliance burden.

The government had set up a committee, comprising central, state tax officials and GST Network Chief Executive to look into the feasibility of introducing the E-invoicing under GST to streamline the generation of invoices and ease the compliance burden.

Furthermore, to ensure smoother assimilation of the E-invoice mechanism into GST, businesses would also be provided with the software, which will be linked to the GST portal for generating E-invoice. The threshold for the same can be fixed on the basis of the value of the invoice.

To know more about E-invoicing mandate:

IRIS Onyx is an automated, integrated and seamless E-invoicing solution!

It is a one-stop E-invoicing solution that can integrate with your billing systems seamlessly in multiple ways and generate IRN with zero disruption to your business.

For any queries or suggestion feel free to connect with us support@irisgst.com.

Gautam Mahanty, VP, Business Development at IRIS, comes with 15 years of multi-national & cross-functional experience across Sales, Strategy, IT operations and Program & Project Management. Graduating in Mechanical Engineering, Gautam did his MBA from Xavier Institute of Management, Bhubaneswar. Gautam has been involved in the operations and delivery of several XBRL projects in IRIS. When not playing with him, enjoys wildlife and long distance running. He is also a deep spiritual seeker, and enjoys reading about, and visiting, places of spiritual significance.