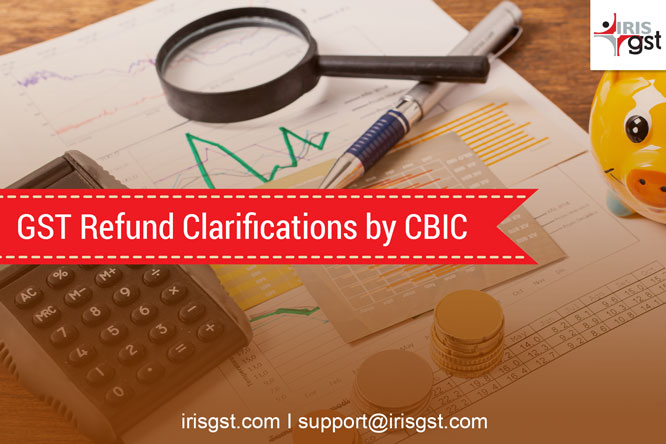 1. Clubbing of refund claims across financial years is now applicable:

According to the circular number: 37/11/2018-GST which was released on March 15th 2018, there was a restriction on clubbing or bunching of GST refunds for tax-periods that are spread across different financial years. The taxpayers were allowed to claim refunds from multiple tax-periods for the same financial year. The next circular which was – Master Circular no. 125/2019 dated November 18th 2019 also continued the same restriction. However, a few taxpayers, especially merchant exporters faced a lot of issues because of this restriction.

Citing such scenarios, the CBIC decided to remove this restriction and now accordingly to the latest modification in the Master circular, the clubbing of GST Refund claims across different financial years is applicable.

2. Cancellation of claims of accumulated ITC in cases of GST Rate Reduction

In Section 54(3) (ii) of the CGST Act suggests that the refund of any unutilised ITC can be claimed only if the amount accumulated is because of the rate of tax on input supplies is higher than the rate of tax on outward supplies. This isn’t applicable for NIL rated or fully exempt supplies. Another aspect that has been clarified via this circular is that if a taxpayer wants to claim the ITC that is accumulated due to inverted tax structure then it is possible only if the input and output supplies are two different classes of goods else it cannot be claimed.

3. Refunds in case of Other than Zero-Rated Supplies:

In refund cases claimed for other than Zero-rated supplies like excess payment of tax, tax paid on intra-state supply subsequently held to be inter-state and vice versa, in case of provisional assessment or refunds on any such grounds, no separate debit of ITC from electronic credit ledger is required to be made by the applicant at the time of filing refund claim, being claim of tax already paid.

Currently GSTN is refunding the amount in cash ledger. However, there could be a scenario wherein such refund relates to liability settled off using balance in ITC ledger. If such amount is refunded in cash ledger then it will give rise to unintended encashment of ITC ledger.

To handle this scenario CBIC issued Notification 16/2020 – Central Tax on 23rd March 2020. As per this notification, the amount will be refunded partially in cash and partially in credit. The ratio to divide the refund amount in cash and credit would depend on the payment made in the original month for which refund is claimed later on.

Providing refunds related to ITC ledger has always been a challenging task for GSTN. Earlier if taxpayers want refund on any invoice which is not reflected in GSTR-2A then they had to provide details of such invoices. Certain changes were made to this rule by inserting sub-rule (4) to rule 36 of the CGST Rules, 2017 vide notification No. 49/2019-GST dared 09-10-2019.

Some more modifications are made para 36 of the circular No, 12/44/2019-GST, dated 18.11.2019. As per this circular the accumulated value of ITC refund to a taxpayer should be limited to the value of such invoices mentioned in GSTR-1 of supplier and reflected in GSTR-2A of applicant.

The applicant of GST refund has to file a copy of their GSTR 2A and Annexure B while filing RFD-01 i.e. while applying for the accumulated ITC refund. For invoices that are not being reflected in Form GSTR 2A and the taxpayer has requested for the ITC claim, such details are to be filed/uploaded separately in Annexure B.

It was noticed that HSN (Harmonized System of Nomenclature) details were not obtainable in Form GSTR 2A due to which it becomes difficult to distinguish between input services, ITC on inputs, and capital goods. This distinction helps to identify the goods and services on which the refund is not available. So the Master Circular clarifies that HSN/SAC code is essential and needs to be mentioned in the Annexure B. The applicant has to fill this information in the additional column provided in it.

Here’s a format of the statement which has been modified and made available for the applicants so as to upload the details of invoices reflecting in their Form GSTR 2A.

The back bone of entire GST Regime is ITC match and GST Refunds that closes the loop of monetary movement. Hence, it is quite imperative that all GST Refunds get processed hassle-free.

And in these times of distress, businesses are looking forward to speedy refunds to get their business going.

An important step before getting the refunds is matching of invoice data to maximize ITC. IRIS Sapphire, a premium cloud based GST Return Filing Software has advanced reconciliation module with strong reconciliation rules like match invoices across FY, beyond invoice number, fuzzy logic and user defined tolerance that helps you completely match your purchase data with GSTR 2A and maximize ITC. Schedule a Demo Today to see how IRIS Sapphire can help you in your GST Reconciliation and understand the benefits for yourself.

for your GST Compliance