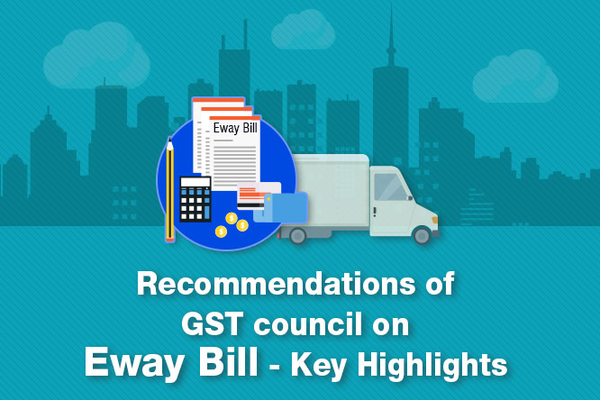 The GST Council, in its 26th meeting held on 10th March 2018, gave a nod for rolling out Eway Bill from 1st April 2018. The Eway Bill mandate to kick-off with inter-state transactions and by 1st June 2018 to be implemented for intra-state movement of goods.

Some of the provisions related to Eway Bill have been amended. The changes by and large pertain to the generation of Eway Bill, its validity, and applicability.

1. Eligibility
1. Eway Bill is needed for consignments having values INR 50,000 or more. As per the update, the value of exempt goods will not be considered while deriving the value of consignment.
2. For transporters who are carrying multiple consignments in a single conveyance and the value of every individual consignment is less than INR 50,000, there is no requirement to create an Eway bill even if the total value of goods in the conveyance is exceeding INR 50,000
3. The Part B of Eway Bill includes the transportation details such as vehicle number in case of road, rail receipt number in case of railways etc. The Part B information needs to be provided before commencing the movement of goods. However, if the mode of transport is rail, air or ship, then the Part B of Eway Bill can be updated either before or after the commencement of movement of goods.
4. The erstwhile exemption limit of 10 km for generation of Eway Bill is increased to 50km. The movement from place of consignor to that of transporter if within the state and within 50km, there is no requirement to fill Part B of Eway Bill..

2. Validity
1. The validity of Eway Bill starts when the Part B is filled. As the over-dimensionalcargo is usually slow moving, extra validity is provided. For a regular vehicle it effectively is 100Km per day, the same for over dimensional cargo is 20Km
2. The validity of an Eway Bill can be extended in case of transshipment or due to exceptional circumstances. For the Eway Bills having validity of one day, expiry time is midnight of the day immediately following the date of generation of eway bill.
3. Once an Eway Bill is generated by one party (could be the consignor or consignee or the transporter), the other party needs to convey acceptance or rejection of invoice within 72 hours or validity of Eway Bill whichever is earlier.

3. Responsibility
1. Usually the Part A of the Eway Bill is provided by the consignor and vehicle details in Part B is to be filled by the transporter. However, as per revised rules, the consignor can authorize transporters to fill the Part A as well.
2. When the movement of goods is related to job work, either the principle or the jobworker if registered, can generate the Eway Bill.
3. Goods can be moved in public transport. In such cases, either the consignor or the consignee is responsible to generate the Eway Bill.
4. Railways, though not required to generate or carry Eway Bill, need to ensure that the goods are handed over only when the recipient shows the Eway Bill. Railways still need to carry the documentary evidence such as invoice or challan along with the goods.

Bill-to and Ship-to
1. In case of a bill-to and ship-to scenario, the location from where the movement of goods will be initiated can be mentioned in ‘place of dispatch’ in the Part-A of EwayBill.

The press release related to Eway Bill changes is available here and the updated rules can be found here.

IRIS is an established GST Suvidha Provider (GSP) and closely working with the NIC for testing the Eway Bill System. IRIS has been in the financial compliance space for over 2 decades having worked with regulators and filing entities alike. We have supported MCA filings for over 700 entities including companies of groups such as Tata, Reliance, TVS, Godrej, L&T etc.  Our Eway Bill solution, branded as IRIS Topaz, is an end-to-end solution for entire Eway Bill cycle. IRIS Topaz can be accessed through web, desktop utility and APIs. The test environment of IRIS Topaz is now available.

IRIS is an established GST Suvidha Provider (GSP) and was one of the first GSPs to complete the integration with NIC’s Eway Bill System. IRIS has been in the financial compliance space for over 2 decades and has worked with regulators and filing entities alike. We have supported MCA filings for over 700 entities including companies of groups such as Tata, Reliance, TVS, Godrej, L&T etc.  Our Eway Bill solution, branded as IRIS Topaz, is an end-to-end solution for entire Eway Bill cycle. IRIS Topaz can be accessed through the web, desktop utility, and APIs.
You can avail our 15-day free trial offer of the full version of E-way Bill Solution. For details please write to support@irisgst.com.
0 Comments
0 Like!
Share
Manoj Jain