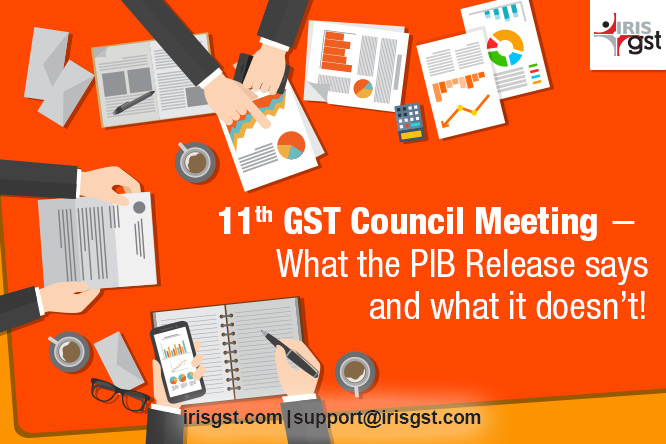 The Goods and Services Tax (GST) Council, in its 11th meeting held on March 4, 2017, decided on some key contours of the CGST and IGST Acts. This meeting effectively cleared the deck for the Central Government to take these two Bills to the Parliament for their passage in the ongoing Budget Session. Here are the highlights from 11th GST Council Meeting.After the GST Council meeting, a fifteen point note was released by the Press Information Bureau (PIB).Here are our comments on each of the points highlighting what it says and more importantly, what it doesn’t!

It appears that State-wise registration has been proposed and demand of centralized registration, particularly for service assesse was not acceded to. This will in turn lead to substantial increase in compliance, particularly for services sector companies like telecom, banking, insurance etc who have at present obtained a ‘centralized’ registration under service tax.On a positive note, it has provided that most of the compliance will be online to reduce the physical interface between taxpayer and tax officials. However, the PIB release falls short of expectation as taxpayers, without return formats, rules and regulations cannot design Information Technology (IT) systems to enable online compliance.

A business entity with an annual turnover of up to Rs. 20 lakhs would not be required to register with GST, unless he voluntarily chooses to do so to be a part of the input tax credit (ITC) chain. The annual turnover threshold in the Special Category States (as enumerated in Article 279A of the Constitution such as Arunachal Pradesh, Sikkim, Uttarakhand, Himachal Pradesh, Assam and the other States of the North-East) for not taking registration is Rs. 10 lakhs.

It appears that the threshold of 20 lakhs and 10 lakhs (for North-Eastern States) has been retained. Alternatively, an assesse below threshold can obtain registration voluntarily to enable them to claim input tax credit.

This threshold could be a cause of concern for many as even a tea, paan or chaat stall vendor could have a turnover of over 20 lakhs.

A business entity with turnover up to Rs. 50 lakhs can avail the benefit of a composition scheme under which it has to pay a much lower rate of tax and has to fulfil very minimal compliance requirements. The Composition Scheme is available for all traders, select manufacturing sectors and for restaurants in the services sector.

The composition scheme for turnover up to 50 lakhs will be available to:

In order to prevent cascading of taxes, ITC would be admissible on all goods and services used in the course or furtherance of business, except on a few items listed in the Law. Read Understanding the GST in 5 Simple Ways to get clarity on claiming tax credit.

Now, the PIB release states that ITC would be admissible on all goods and services used in the course or furtherance of business, except on a few items listed in the Law. Thus, it will be interesting to see whether the negative list of credits is curtailed in the final law.

The PIB release states that it has been provided that the taxes paid under the Central Law can be cross-utilized for payment of taxes under States or Union Territories laws. In this regard the larger question is whether CGST credit can be adjusted against SGST and vice versa. The answer to this question in the revised GST law is ‘no’.

Thus, we will have to watch out for this interesting development in the final law.

There also appears to be a new UTGST now. This was not proposed earlier. So, do we now have a pentagonal structure with CGST, SGST, IGST, UTGST and GST cess!

Read How GST Rates Could Impact Your Business Strategy to know more on GST rates.

7. Flow of ITC in Service Sector

In the services sector, the existing mechanism of Input Service Distributor (ISD) under the Service Tax law has been retained to allow the flow of ITC in respect of input services within a legal entity.

It appears that for the services sector, the GST law has retained the ISD mechanism. However many questions are left open:

To prevent lock-in of capital of exporters, a provision has been made to refund, within seven days of filing the application for refund by an exporter, ninety percent of the claimed amount on a provisional basis.

The GST Council has decided to refund, within 7 days of filing of refund application, 90% of refund claimed on provisional basis. This is certainly a very welcome step and will benefit the exporter community which is plagued by global challenges including H1B visa rules.

Further, a provision for up-front exemption (such as through the mechanism of CT-1 etc) would have certainly been more helpful for exporters.

In order to ensure a single administrative interface for taxpayers, a provision has been made to authorize officers of the tax administrations of the Centre and the States to exercise the powers conferred under all Acts.

It appears that there could be a single administrative interface for taxpayers.

Few questions are left open currently such as whether there will be a single administration for all assesses or only small taxpayers. We will have to see the fine print to understand whether the fear of ‘dual’ assessment of taxpayers is addressed completely.

An agriculturist, to the extent of supply of produce out of cultivation of land, would not be liable to take registration in the GST regime.

To provide certainty in tax matters, a provision has been made for an Advance Ruling Authority.

It appears that the provision of an Advance Ruling Authority, already prescribed in revised GST law, has been retained.

Exhaustive provisions for Appellate mechanism have been made.

Detailed transitional provisions have been provided to ensure migration of existing taxpayers and seamless transfer of unutilized ITC in the GST regime.

The PIB only provides that exhaustive provisions for seamless transfer of unutilized ITC is made. However, the PIB is silent on:

An anti-profiteering provision has been incorporated to ensure that the reduction of tax incidence is passed on to the consumers.

To ensure that there are no inflationary spikes on GST introduction, the Government has retained the anti-profiteering provision. This is a welcome step for consumers; however, anti-profiteering measures will certainly throw challenges for the industry.

In order to mitigate any financial hardship being suffered by a taxpayer, the Commissioner has been empowered to allow payment of taxes in instalments.

It appears that in case of hardships, a taxpayer may be allowed by the Commissioner to make payment of taxes in installments. This will certainly help ailing industries/ taxpayers that are not able to pay GST.

Though, the 11th Council Meeting has cleared lot of doubts around GST, few things are still under grey area.

Also, services being intangible in nature, the scope for wrong determination increases considerably for pan-India service sector players (such as banking, telecom insurance etc). However, there is no mention in the PIB release on whether the Place of Supply provisions are suitably amended for better clarity.

If you have any questions on the GST, please write in to support@irisgst.com.