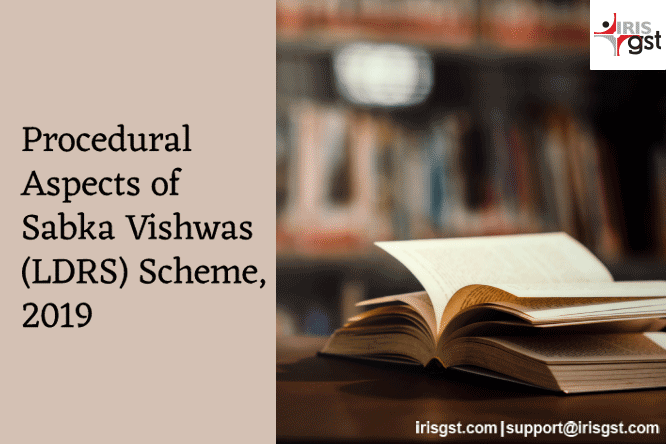 Sabka Vishwas (LDRS) Scheme, 2019, a dispute resolution and amnesty scheme under GST, shall come into force from September 1, 2019. This Legacy Dispute Resolution Scheme aims to curb the pending litigation under the previous Indirect Tax Enactments (Central Excise, Service Tax and Cesses), which were carried forward to the GST regime. The scheme not only offers relief of a certain percentage from tax dues but also provide taxpayers with an opportunity to clear off the interest and penalty as well.

How to benefit from the Legacy Dispute Resolution scheme?

If a taxpayer is eligible to declare a relief, he is required to follow the below-given steps to avail the benefits of the scheme:

What is a Discharge Certificate?

Upon the resolution of the dispute, the declarant shall be issued a Discharge Certificate, effective with the follows

How will the relief be determined?

The relief available for the declarant shall be determined on the basis of the Situation and the amount of tax due, as given below:

P.S: If the declarant has already paid an amount as a deposit/pre-deposit in appellate proceedings or in the course of enquiry/investigation/audit, the given amount would be adjustable against the sum payable by the declarant. However, if the paid amount exceeds the amount payable after considering the tax relief, no refund of such amount shall be available.

IRIS GST is one of the leading GSPs in India. Our GST compliance solution, IRIS Sapphire, is designed to make your return preparation and filing process easy and efficient. For any queries or to book a demo, please write to support@irisgst.com or visit our site https://irisgst.com.