Eway Bill
How to generate an E-way Bill if the goods are rejected by the recipient?
by Neena Sethi in Eway Bill
Publish on July 27th, 2020

The GST Network plans to activate an automated system from 1st December 2020 that will block the generation of E-way Bills for non-filers of monthly GST return form GSTR-3B, irrespective of turnover limits.

In the GST regime, an E-Way bill (Electronic Way Bill) needs to be generated on the GST portal – ewaybillgst.gov.in when goods of Rs. 50,000 or more are being transported from one place to another. If a person transports goods of Rs. 50,000 or more in value without generating an E-Way Bill, this attracts penalties and confiscation. Every time a new E-Way bill is generated, a unique E-Way Bill Number (EBN) is allotted. It is made available to all the people involved i.e. to the supplier, recipient, and the transporter.

As stated, an E-way bill is generated when goods of value 50,000 or more are transported in relation to:

Note: E-way Bill has to be generated in case of inter-state transfer even if the goods are less than Rs. 50,000 of value.

How to generate an E-Way Bill?An E-way Bill can be generated in multiple ways:

It helps you manage the entire life cycle of your EWB, right from the generation to updates, rejection and cancellation. Topaz is designed to cater to the needs of suppliers, consignors and transporters alike, by enabling creation of business hierarchy and role/EWB assignment to mimic your sales and dispatch processes. With Topaz, you can plan and manage your E-Way bills in an easy and automated way, on the go!

How to generate an E-Way Bill when the goods are rejected by the recipient:

CASE I: The goods are in the warehouse of the transporter and are rejected by the recipient event before receiving them. Here, the goods will have to be transported back to the supplier’s godown. 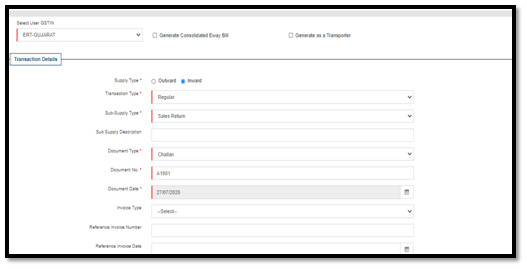 NOTE: As an inward E-way bill, the recipient’s GSTIN and address will always be of the supplier in all the cases.

Case II: The goods have reached the recipient and then they get rejected due to say some damage or ‘faulty products received’ or some ‘other consignment is received’ mistakenly. In this case, the goods again have to be transported back to the supplier.

A delivery challan is a document which is issued for transporting goods from one place to another when the traction is not considered as a ‘supply’.

NOTE: As an inward E-way bill, the recipient’s GSTIN and address will always be of the supplier in all the cases.

There are 15 comments on this post
Leave a reply