It’s the last month of the year 2018 and also the month for filing the GST Annual Return.

In this issue, we’ll be covering the ITC details to be reported in GSTR 9 and some interesting statistics around eWay Bill and Advance Ruling released by the GST council.

We are ready to release our GSTR 9 solution soon and believe the preparation and filing of Annual Return will be quite simple and easy for. Whether or not, you have been using IRIS solution for filing GST monthly returns, you can still use our solution for GSTR 9

Please get in touch with our team to get preview and early access of our solution or register for a free webinar.

The Comptroller and Auditor General (CAG) of India is conducting performance audit of GST and is likely to finalise its report soon. The performance audit report on implementation of Goods and Services Tax (GST) could be tabled in Parliament as early as in the forthcoming Winter session

Due date extended for GSTR 7

As recently notified, the filing due for GSTR 7 which is the return for TDS details, is extended to 31st Jan 2019. The returns for the period from Oct to Dec 2018 can be filed by this date.

Want to request for our product demos?

Please reach out to us at

ITC details in Table 6 of GSTR 9 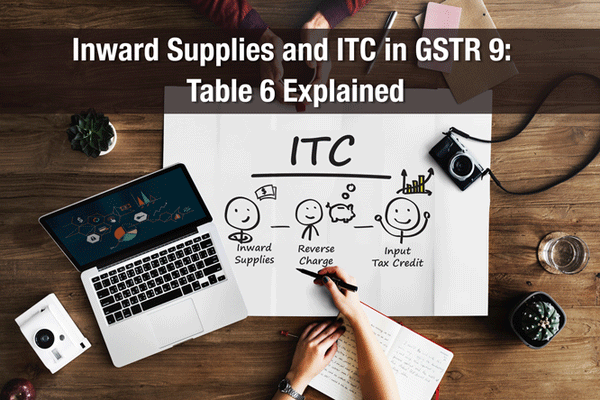 The Annual Return GSTR 9 consists of details of outward and inward supplies along with ITC claimed, reversed, tax liability, tax payment and the adjustments are to be reported.

Some of the details in GSTR 9 can be computed using the detail in returns filed earlier, while the remaining sections need to be prepared by the taxpayer.

There are three tables for providing ITC details, of which one table can be partially derived using data filed with GST.

ITC claimed and reversal information is submitted by the taxpayers in GSTR 3B on the monthly basis.

Let us look at Table 6 of GSTR 9 in detail. The key details to be provided in this table are

Table 6A: Total amount of input tax credit availed through FORM GSTR-3B (sum total of Table 4A of FORM GSTR-3B)

Table 6B: Inward supplies (other than imports and inward supplies liable to reverse charge but includes services received from SEZs). ITC claimed needs to be further bifurcated into ITC on account of input goods, services and capital goods

Table 6C: Inward supplies received from unregistered persons liable to reverse charge (other than table 6B above) on which tax is paid & ITC availed

Table 6D: Inward supplies received from registered persons liable to reverse charge (other than table 6 B above) on which tax is paid and ITC availed

Table 6E: Aggregate value of input tax credit availed on all imports (for inputs and capital goods) from outside India or SEZ units

Table 6F: Import of services (excluding inward supplies from SEZs). Here aggregate value of input tax credit availed on all import of services received from outside India should be reported.

Table 6G: Input Tax credit received from ISD. This section can be populated using the details submitted in GSTR 3B in table 4(A)(4).

Table 6H: Amount of ITC reclaimed and covers the aggregate value of input tax credit which was availed, reversed and reclaimed again during the same financial year.

Table 6J: Ideally, the difference in Table 6J should be nil. This is for the reason that the amount disclosed in 6A is auto populated from GSTR 3B of July 2017 to March 2018.

Table 6K: Amount of credit received in the electronic credit ledger through FORM GST TRAN-I up to 31st March 2018.

Table 6L: Amount of ITC received in the electronic credit ledger through FORM GST TRAN-II and should not include amount included in TRAN-II is filed after March 2018,

Table 6N: This contains the total of all the ITC availed through TRAN-I, TRAN-II and any other ITC availed during the relevant financial year

Table 6O: Total ITC availed as per GSTR-3B and other ITC credited directly to electronic credit ledger by filing TRAN-I, TRAN-II, ITC-01 and ITC-02.
Table 6 overall consists of about 80 data points of which half of the data points can either be computed using the earlier filed data or are sub-totals.
Click here for more detailed analysis and points to be kept in view will preparing the ITC details for Table 6 of GSTR 9 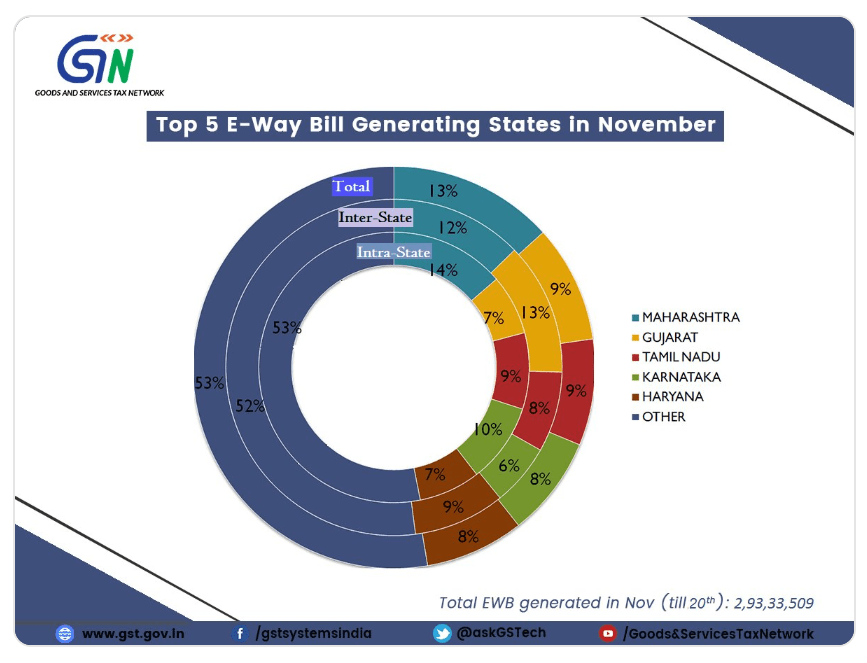 If you are looking out for an easy and simple eWay Bill solution, check out IRIS Topaz

Getting most out of GST data

Business have been filing the GST returns for over a year now and it deeper look reveals that while compliance is the main purpose, the granularity and spread of the details makes it a rich data mine. From invoice level details to aggregate information and from a single GSTIN to the business as whole, the GST data if analysed, can be a valuable input to decision making and efficient tracking of GST compliance.

With IRIS Sapphire, along with GST compliance what you get is a palette of reports and insights covering performance at business and GSTIN level, different perspectives of the data and cross validation of data filed in different returns i.e. GSTR 1 and 3B and GSTR 2A and 3B.

A Dashboard View which gives a quick overview of your outward supplies and tax liability for the previous 6 months at group level with a drill down to the GSTIN level. You can also select the duration for which you want the data and download the same 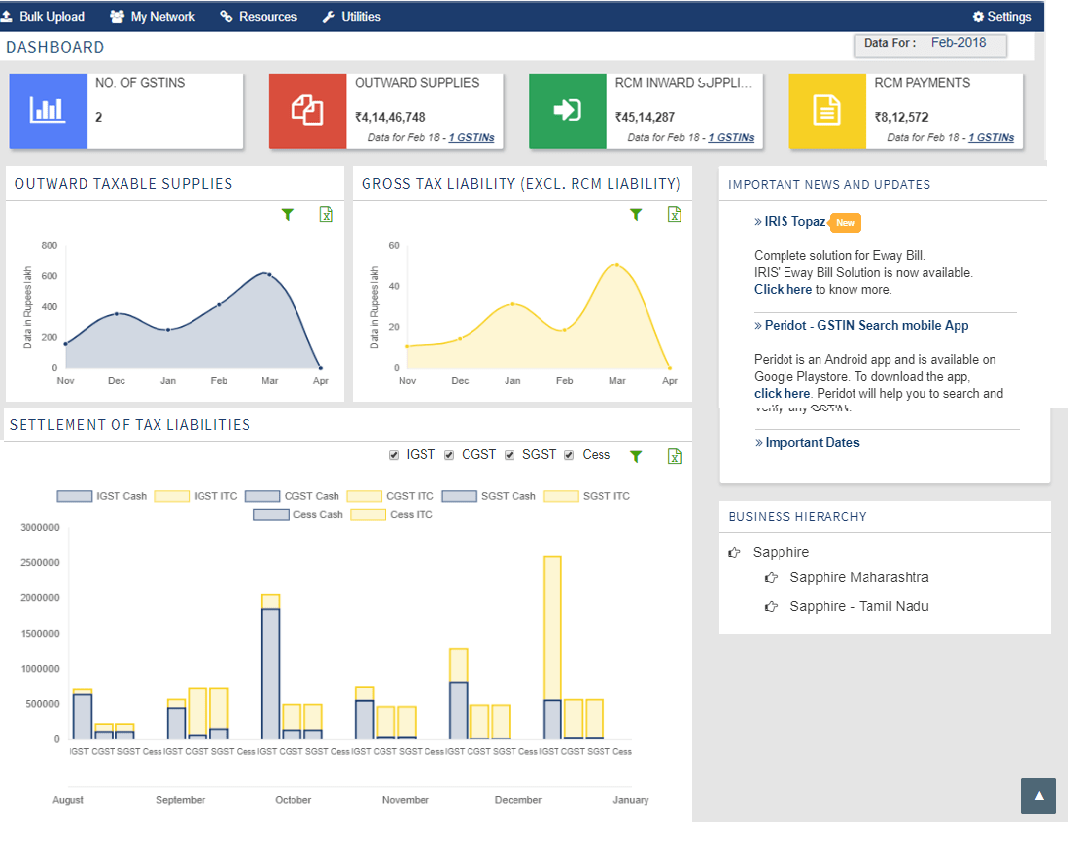 A Reporting module which includes 30+ widgets based on GSTR 1, 2A and 3B data. These widgets give detailed analysis of data reported such as geographical distribution of sales, composition of every GSTIN to the overall sales, transactions within the PAN or Group GSTINs. Insights such as quantum of ITC not available due to non-filing of return by counterparty or different POS mentioned, top counterparties from whom purchases are made or to whom sales are made

Advance tax ruling is sought when further clarifications are required with respect to provisions and application of the rules.

In case of uncertainty or ambiguity a taxpayer can request for advance ruling and written interpretation by the authorities is provided.

Key provisions to note while applying for Advance ruling

Section 97: An applicant desirous of obtaining an advance ruling under this Chapter may make an application in such form and manner and accompanied by such fee as may be prescribed, stating the question on which the advance ruling is sought.

The GST council publishes the details and statistics on applications and disposal of Advance Rules. The MIS for Month of Oct 2018 is available for download here

Gujarat, Karnataka, Maharashtra, Delhi and Tamil Nadu are the top 5 states to have applied for Advance Ruling

The clarification provided for Advance Ruling are available here