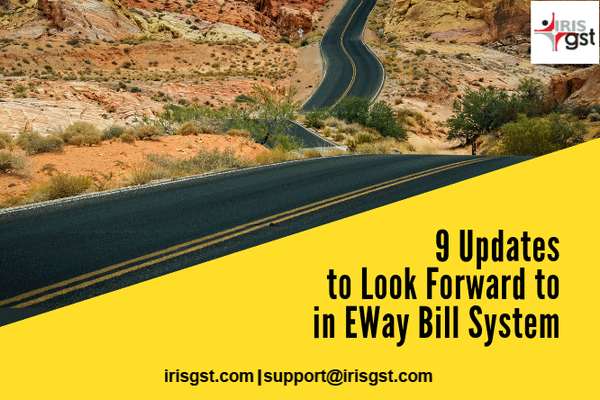 In an attempt to lower the possibilities of GST evasion, e-way bill system was rolled out on April 1, 2018, for inter-state movement of goods worth over Rs 50,000. The same for intra or within-the-state movement was rolled out in a phased manner from April 15, 2018. Since then, CBIC, NIC and GST Council have been collectively working to analyse filed data, identify gaps, fine tune processes and ultimately modify existing rules to curb tax evasion.

There have been several announcements with this regard to E-way bill system, we bring a compendium of the same for your easy assimilation:

From 2019, E-way bill system auto calculates the distance for movement of goods based on the postal PIN codes of source and destination locations. User is allowed to enter the actual distance as per his movement of goods. However, it allows a variation of only 10%. That is the e-way bill system calculates and displays the actual distance between the supplier and recipient addresses.

For example, if a transit distance is calculated as 900km by the system, then the user can transit the goods up to 990kms (900kms+90kms)

In case, the source PIN and destination PIN are same, the user can enter up to a maximum of 200KMs (2021 Eway bill updates: The validity of e-way bills for cases other than over-dimensional cargo to be calculated based on a distance of 200 km and not 100 km from 1st January 2021 onwards). If the PIN entered is incorrect, the system would alert the user as INVALID PIN CODE. However, he can continue to enter the distance. Further, these e-way bills having INVALID PIN codes are flagged for review by the department.

The flip side of this rule is at times flexibility is required in the system when drivers need to travel distances more than the prescribed limits due to unforeseen circumstances such as under-construction pathways, natural calamities, socio-political environments etc.

Many a times, transporters/consignor conduct multiple trips on a single e-way bill and/or do not show e-way bill invoices while filing sales return. It has also come to the notice that certain businesses do not generate e-way bills even as supplies are being made. For such cases, the tax authorities have started seeking ‘clarification’ from the taxpayers.

In one such case, a taxpayer was asked to provide “clarification” within three days on the difference between taxes paid and the liability which the tax officer has ascertained after analysing sales return GSTR-3B and e-way bill data for the period October 2018 and January 2019, by Ghaziabad GST commissionerate.

As per the representation received by the transporters, the government has decided to bar generation of multiple e-way bills based on a single invoice. That is, once E-way Bill is generated with an invoice number, then none of the parties – consignor, consignee or transporter – can generate the E-Way Bill with the same invoice number.  However, same invoice reference shall be quoted in cases of primary document of delivery Challan, where multiple E-Way Bills are required to be generated as goods of single consignment are transported in multiple vehicles.

Since 2019, the Goods and Services Tax (GST) authorities have started tallying the two sets of data received by GSTN : GST return filings in GSTR 1 and e-way bills. These are matched with the summary reconciliation statements of estimated tax liability, thereby, forcing businesses to explain discrepancies such as under-reporting distances. Read here to know more: Importing Your E-way Bills into GSTR-1: How You Need to Prepare?

As recommended in 31st Council meeting, there are restrictions on E-Way Bill generation if GST returns are not filed for two consecutive tax filing periods. The Goods and Services Tax Network (GSTN) is developing a system such that businesses who have not filed returns for two straight return filing cycle, which is 6 months, would be barred from generating e-way bills. Read here to know more: Blocking and Unblocking of E-Way Bill

6. Barring of Generation of E-Way Bill for Interstate Movement by Composite Taxpayers

7. Extension of E-Way Bill in case Consignment is in Transit

The transporters had represented to incorporate the provision to extend the E-way Bill, when the goods are in transit. The transit means the goods could be on Road or in Warehouse. This facility is being incorporated in the next version for the extension of E-way Bill.

During the extension of the e-way bill, the user is prompted to answer whether the Consignment is in Transit or in Movement.

In both these scenarios, the destination PIN from the PART-A of the E-way Bill is considered for calculation of distance for movement and validity date.

Ideally, every EWay Bill generated is a sub-set of the invoice with additional details on location where the goods are to be transported, distance, Transporter’s ID etc. In the 31st GST Council meeting, the authorities announced the linking of GSTR 1 with E-way Bills (EWB) in order to check GST non-compliance.

Some transporters complete multiple trips on a single e-way bill. An integration of NHAI’s FASTag with e-way bill will help authorities to know the exact location of the vehicle and when and how many times it has crossed NHAI’s toll plaza. The move would improve operational efficiencies across the country’s logistics landscape. Read here to know more about FASTag enabled E-way Bill

With these changes such as automatic calculation of distance between two locations via PIN codes and one e-way bill for one invoice, coupled with greater focus on RFID enabled vehicles, tracking the consignments would be easier.

IRIS Topaz Desktop Utility, an MS Excel-based application, will enable you to manage all your E-way Bill related tasks simply and quickly.