In this issue, we’ll be covering the highlights of the 36th GST council, held on 27th July, 2019 .The issue also provides you with detailed explanation on how to fill Part IV and V of the annual return form GSTR 9. The issue also covers all the updates released in the month of July for IRIS Sapphire and IRIS Topaz.

The feature of the issue is IRIS Sapphire –GSTR 1 and EWB reconciliation.

These two forms would be part of the proposed GST Return filing system under wherein the taxpayer would have to file FORM GST RET-1 (Normal) / FORM GST RET-2 (Sahaj) / FORM GST RET-3 (Sugam) on either monthly or quarterly basis.

It will also contain details auto-populated from Form GSTR-5 and Form GSTR-6..

The release included, “ taxpayer will be required to take action on details of inward supplies contained in Form GST ANX-2 by accepting or rejecting the entries. The taxpayer can also keep the invoice pending by marking the entry accordingly,

CBIC vide Circular No. 105/24/2019-GST dated June 28, 2019, has clarified that the treatment of tax in cases of secondary discounts or post-sales discount under GST regimes for the purpose of determination of the value of supply.

If post-sale discount is givenby the manufacturer or wholesaler (“supplier of goods“) to the dealer without any further obligation or action required at the dealer’s end, then such discount will be related to the original supply of goods and not included in the value of supply subject to the fulfillment of provisions of Sub-Section (3) of Section 15 of the Central Goods and Services Tax, 2017 (“CGST Act“)

The supplier of goods can issue financial/commercial credit notes in such cases but he will not be eligible to reduce his original tax liability.

IRIS Topaz offers you a 360° solution for all your E-way Bill Needs. A cloud-based tool, IRIS Topaz, provides you with the ability to manage all your tasks related to E-way Bill in an easy and automated way, on the go.

Have feedback for us?

Want to request for our product demos? Please reach out to us at 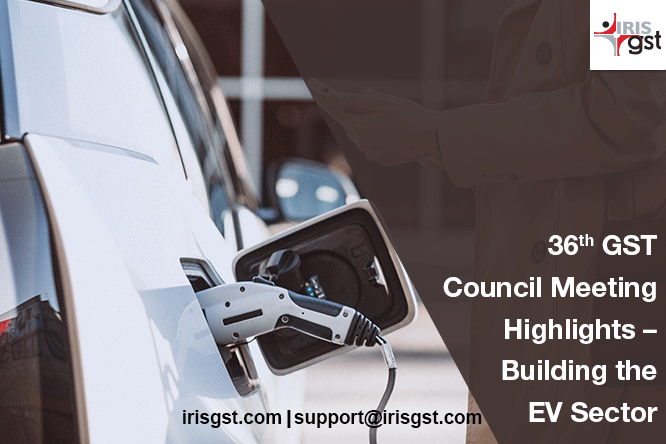 The 36th GST Council Meeting was held on 27th July 2019 with the prime agenda being – reduction of GST rates applicable on Electric Vehicles. The meeting originally scheduled on 25th July 2019 had to be deferred to a later date as the Chairperson and Union Minister of Finance & Corporate Affairs, Nirmala Sitharaman, was pre-occupied with her duties in the parliament. The 36th GST council, convened over Video Conference, has recommended the follows:

Boosting the EV sector in India

In an attempt to provide a boost to the eco-friendly alternative to the automotive industry, the GST council has recommended GST rate slashes for Electric Vehicle sector, as given below:

The GST council has extended the time period for a taxpayer to opt-in for composition scheme. The last date for filing of intimation in form CMP 02 has been shifted from 31st July 2019 to 30th September 2019. However, such extension is applicable only for the service providers notified under notification No. 2/2019-Central tax (rate) dated 07.03.2019 for a special Composition Scheme.

Furthermore, the due date for paying GST in CMP-08 (for the quarter April-June 2019) for all the composition dealers has been extended from July 31, 2019 to 31 August 2019. The extension shall provide both, the taxpayer as well as the GSTN, the much needed time to prepare for form CMP 08 (which is yet to be added on the GSTN portal).

The annual return is divided into 6 parts, wherein Part I covers basic details, Part II is for outward supplies and Part III is important section covering ITC related reports in Table 6, Table 7 and Table 8. Let us dig into to the particulars of Part IV and V.

For Interest Payable and Paid
For reporting the amount of interest under the given column, interest actually admitted and paid must be reported here. The details of interest actually paid under Section 50 can be captured from Table 5.1 of GSTR 3B filed for the financial year, if paid.

For Late Fees Payable and Paid
For reporting Late Fees duly paid during the period July 2017 to March 2018 for late filing of any of the GST Returns on which Late Fees was levied and paid by the Registered Person,.

For Penalty and Other Dues Payable and Paid
In GSTR 3B, there is no Table specified for payment of any Penalty or Other Dues. However, under the law there can be instances where a person filing an Annual Return might have paid penalty due to various instances such as like for causing movement of goods in violation of provisions of Rule 138 or due to any order passed by proper officer etc.

Part V – Particulars of the transactions for the FY 2017-18 declared in returns between April 2018 till March 2019, consisting of following tables:

IRIS Sapphire now supports the reconciliation between your Eway bills and GSTR 1, as mandated by the GST council

With this feature, the user will be able to do reconciliation between documents uploaded for GSTR 1 against the document details for which E-way bills (EWB) have been generated.

The reconciliation results provide the user with the following details:

Although, it should be noted that the reconciliation between GSTR 1 and EWB can be done only on GSTIN level, for a period of one month at a time.

How to reconcile your GSTR 1 and EWB data with IRIS Sapphire:

So as a Sapphire user, who want to use this feature, needs to do one-time setup activity.

Let’s see how to use this feature:

IRIS Sapphire is an application built with a highly scalable, available and secure architecture that will help you to file with GST. With built-in analytics and dashboards, IRIS Sapphire will ensure that you stay compliant, while always having a pulse on the process. Click here for free demo

Putting customer satisfaction at priority, every month our team at IRIS GST strive hard on to further simplify your GST journey. Thus, here are the product/feature updates for the month of July.

GSTR 2P Summary
IRIS Sapphire now provides the user with a detailed break up of GSTR 2 data based on the data uploaded by the user.

Bulk Download
Similar to the bulk upload feature of IRIS Sapphire, users will be able to bulk download the details of the business errors in his uploaded data for more than one GSTIN. However, the download is restricted to data related to single form, period and section.

IRIS topaz  is under a minor revamp, wherein the utilities of our Eway Bill managing tool can aid the supplier/consignor as well as the transporter. And for the same, the following 2 features has been added on our portal, to aide the transporters with their logistic process.

Assign to me
With IRIS Topaz’s Assign to me feature, transporters can have the EWB assigned to them from the supplier or the consignor.

Consolidated EWB
If a transporter has multiple consignments allotted to him against multiple Eway bills, he can now consolidate all these Eway bills into one with IRIS Topaz.

According to the valuation rule, the expenditure or costs incurred by the supplier as a pure agent (contracted to the recipient of the supply of services) shall be excluded from the value of supply, if all of the following conditions are satisfied:

Cancellation, Revocation and Re-Registration under GST

Late Fees and Penalty under GST

How to register for GST online

Types of notice under GST