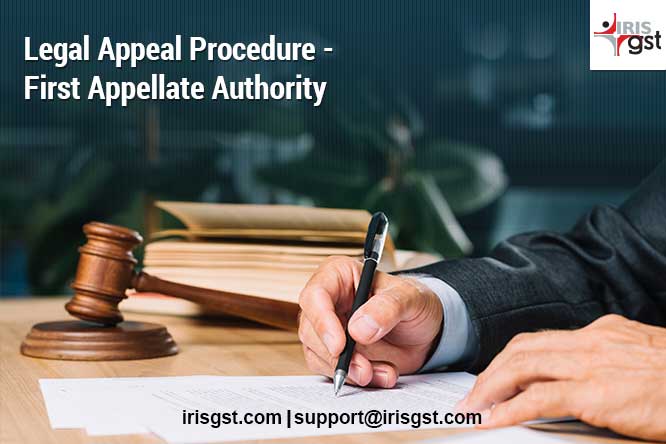 Under the GST law , a person unhappy with the order issued against his appeal on a legal dispute, by the adjudicating officer can raise an application for a revision, cancellation or reversal of the same to a higher court i.e. First Appellate Authority (in this case). In order to make an appeal to the First Appellate Authority, a person has to file form GST APL 1 within 3 months (extendable up to 1 month) of the issuance of order.

Pre- deposit for filing  a Legal appeal under GST Law

In order to successfully file an appeal, the appellant has to mandatorily pre-deposit such part of the amount of tax, interest, fine, fee and penalty arising from the impugned order, as is admitted by him. In addition, he is also required to deposit a sum equal to the 10% of the remaining amount of tax in dispute arising from the said order, in relation to which the appeal was filed under GST Law.

Legal Appeal by a Commissioner to the First Appellate Authority under GST law?

Adjournment by the First Appellate Authority

Based on sufficient causes, the First Appellate Authority may adjourn the hearing of the appeal, wherein the reason for the same has to be recorded in writing. Furthermore, the number of adjournment allowed for a hearing is restricted to three times.

Additional Grounds for an appeal

In case an appellant wishes to add additional grounds to his appeal, which were not wilfully omitted in the grounds of appeal, the first appellate authority can allow the same at the time of the hearing under GST Law.

Decision of the First Appellate Authority under GST Law

Time limit for the decision

The First Appellate Authority is required to pass an order within a period of 1 year from the date of filing the appeal.  However, if the order is stayed by an order of a Court or Tribunal, such period of stay shall be excluded from the given one year period.

Communication of the decision

The First Appellate Authority is required to communicate the order issued to the appellant as well as to the adjudicating authority under GST Law .  A copy of the order has to be sent to the jurisdictional Commissioners of CGST and SGST as well.

The Commissioner may call for a verification of records for any proceedings against the order passed by the Adjudicating Authority, on his own motion, or upon request from the Commissioner of State tax or Union Territory tax. He can further direct any officer subordinate to him to apply to the Appellate Authority to ensure its legality and propriety, subject to the follows:

Furthermore, the revisional authority can stay the order for a time period as he deems fit, wherein the concerned person provided a reasonable opportunity of being heard.

When is revision not allowed under GST Law?

The Chief Commissioner or Commissioner can pass an order on any point which has not been raised in any appeal. Such order must be passed before one year from the date of the appeal order or before three years.