Eway Bill
Generating E-way Bills under Bill to and Ship to Scenario
by Vaishali Dedhia in Eway Bill
Publish on August 1st, 2022 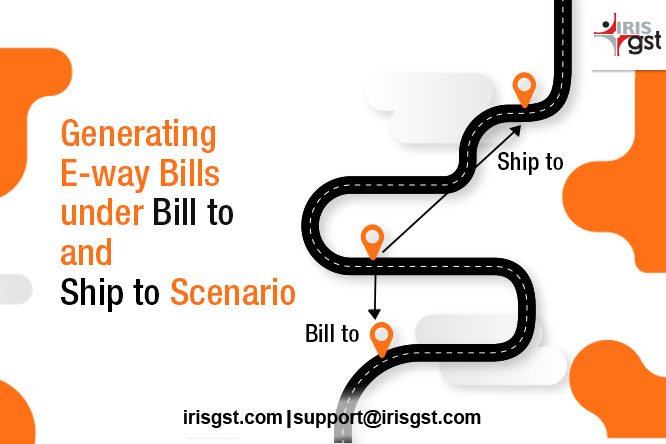 ‘Bill-to and Ship-to’ is a common business scenario wherein the party to whom invoice is billed is different from the party actually receiving the goods or services. While reporting in GST returns and also for seamless transfer of Input tax credit, there are two invoices generated in the transaction.

Supplier A in Maharashtra sells some goods worth Rs.1,00,000/- attracting 5% GST and bills to customer B in Maharashtra. On instructions from customer B, the goods are to be supplied to C in Karnataka. Now as per GST rules, there will be two invoices –

Now, as per rules, an E-way Bill Number is to be generated whenever there is any movement of goods subject to the certain conditions. In Bill-to and Ship-to scenario, though there are two invoices, the physical movement of goods is happening only once. Thus E-way bill under GST needs to be created only once and could be based on either of the invoices.
In Bill-to and Ship-to scenario, there are four places and parties. A look at the information included for the generation of E-way bill on the portal, it is clear that following persons and places are needed –

Here, either the supplier A or the other party B, can generate the E-way Bill Number. Using the same example, let us understand the details to be provided while generating E-way Bill Number

To sum up, the details to be provided for generating E-way bill are primarily determined by who is generating the E-way bill.

For further reading, you can refer to the press release detailing the Bill-to and Ship-to scenario here. The excerpt from E-way Bill FAQs on NIC portal is highlighted below

A: Sometimes, the taxpayer raises the bill to somebody and sends the consignment to somebody else as per the business requirements. There is a provision in the e-way bill system to handle this situation, called as ‘Bill to’ and ‘Ship to’. In the e-way bill form, there are two portions under ‘TO’ section. On the left-hand side – ‘Billing To’ GSTIN and trade name is entered and in the right-hand side – ‘Ship to’ address of the destination of the movement is entered. The other details are entered as per the invoice. In case, ship to state is different from Bill to State, the tax components are entered as per the billing state party. That is if the Bill to location is inter-state for the supplier, IGST is entered and if the Bill to Party location is intra-state for the supplier, the SGST and CGST are entered irrespective of movement of goods whether movement happened within the state or outside the state.

Hope this article and the examples explain the Bill-to and Ship-to scenario and its impact on E-way bill.