Form GST RFD-05 is the fifth form in the GST Refund form series. It is basically a payment Advice. In our previous articles, we discussed in-depth about Form RFD-01 which is a refund application, form RFD-02 which is also known as the acknowledgement followed by form RFD-03 – the deficiency memo and form RFD-04 which is the provisional refund order.

The official government officer-in-charge shall issue a payment advice in Form GST RFD-05 for the amount sanctioned under sub-rule (2). It will also be electronically credited to any of the bank accounts of the application mentioned in the registration particulars and as specified in the application for refund.

Note: If any interest is to be payable to the applicant then it will be included in RFD-05.

Following are the details of form RFD-05:

The form starts with a Sanction Order No and it is more like a letter which addresses the applicant.

The body of this order begins with the application reference number (ARN), date, acknowledgement number and date.

Further, there is a table which provides details of the amount sanctioned, claimed and bank account in which refund is processed.

A total of 13 points are mentioned in this table:

i) Amount of refund claimed: This refers to the actual amount which is claimed by the applicant

ii)Refund Sanctioned on Provisional Basis (Order No……date): If any amount has earlier refunded on provisional basis then the details of the same should be entered in this point

iii) Refund amount inadmissible <<reason dropdown>>: If any amount is inadmissible for a refund then the details of the same should be entered here

iv)Balance refund allowed (i-ii-iii): This is simply the difference between point (i), (ii) and (iii) above

vi) Net Amount of refund sanctioned: This is the amount which has been sanctioned in the order.

vii) Bank Account No. as per application: This is the bank account number in which refund is processed and the amount is credited.

viii) Name of the Bank: The name of the bank in which refund is credited

xii) IFSC: IFSC code of the branch in which refund is credited

xiii) MICR: MICR code of the branch in which refund is credited. 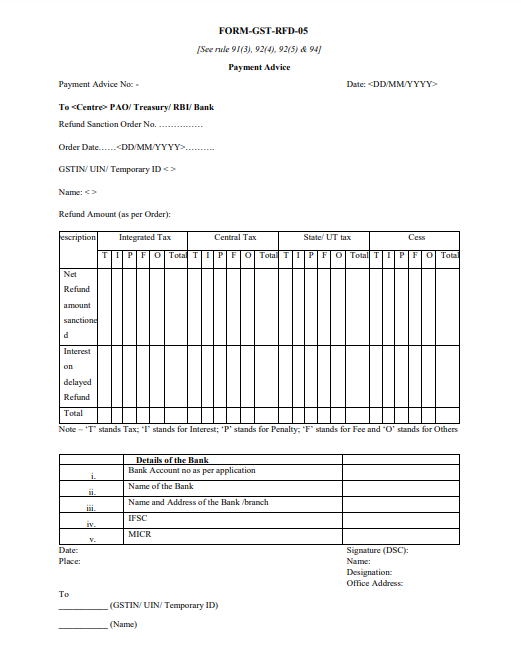 New changes for the taxpayers as per GSTN:

Features not available/ proposed at a later date:

There is no link of withholding order (RFD-07B) and the payment advice. It means the officer can issue RFD-05 even if there is a withholding order in RFD-07B against the ARN. The development of completely interlinked withhold and release functionality is under process and shall be deployed in the future. There is no auto-auto calculation of interest amount and the system doesn’t validate the interest amount i.e. it’s a free text field to be entered by the tax officer.

IRIS GST helps all its readers with its premium product – IRIS Sapphire which is a cloud-based GST Return Filing Software and has advanced reconciliation module with strong reconciliation rules like match invoices across FY, beyond invoice number, fuzzy logic and user-defined tolerance that helps you completely match your purchase data with GSTR 2A and maximize your ITC.