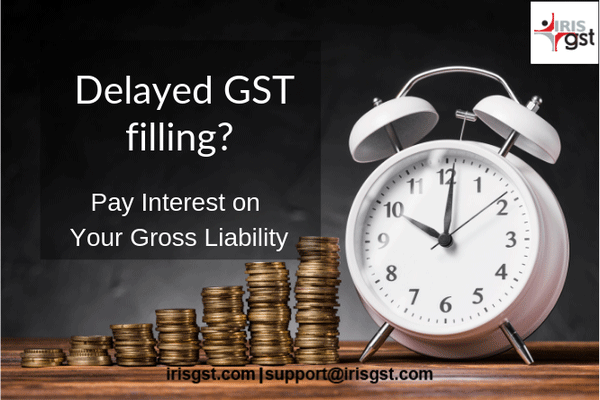 
Interest is payable on the gross liability, if there is delay in GST returns filling

Hyderabad, Apr 23 In a move that would have a significant impact on businesses that use tax credits available on inputs and raw materials to reduce payment in cash, the Telangana High Court has ruled that no input tax credit (ITC) is available unless GST returns are filed and a taxpayer is liable to pay penalty on the entire liability.
Facts of the case :-
M/s. Megha Engineering & Infrastructures Ltd., The petitioner is engaged in the manufacture of MS Pipes and in the execution of infrastructure projects. After the enactment of the Central Goods and Services Tax Act, 2017 (for short ‘CGST Act, 2017’), the petitioner registered themselves as a dealer under the Act and they claim tobe regularly filing returns and paying taxes.

Under the CGST Act, 2017, the registration of dealers, input tax credit, filing of returns, payment of duty and issue of notices, all happen only on-line. All Assesses are required to log into the GST Portal for payment of duty and for filing of returns. The Assesses are required under the Act to file a return in Form GSTR – 3B on or before the 20th of every month, for the discharge of their liability of the previous month. The GST liability is permitted to be discharged by utilizing the ITC available. An electronic ledger is maintained, showing the amount available to the account of an asses see through the ITC.

The case of the petitioner is that the GST Portal is designed in such a manner that unless the entire tax liability is charged by the asses see, the system will not accept the return in GSTR – 3B Form. As a result, even if an Asses see was entitled to set off, to the extent of 95%, by utilizing the ITC, the return cannot be filed unless the remaining 5% is also paid.

It appears that there was a delay on the part of the petitioner in filing the returns in GSTR – 3B Forms, for the period from October, 2017 to May, 2018. This was due to the shortage of ITC, available to off-set the entire tax liability.

Thus, there was a short fall to the extent of 45,44,03,252/-, which the petitioner was obliged to pay by way of cash. According to the petitioner, they could not make payment and file the return within time due to certain constraints. However, the entire liability was wiped out in May, 2018.

After the petitioner discharged the entire tax liability, the Superintendent of Central Tax issued letters demanding interest at 18%, in terms of Section 50 of the CGST Act, 2017. The Assistant Commissioner also issued demanding payment of interest.

Under Section 39, a detailed procedure is stipulated for the filing of the monthly returns. In brief, the Scheme of Section 39 is as follows:

Sub-section (2) of Section 16 lays down four conditions subject to which a registered person will be entitled to the credit of any input tax.
These conditions are

Section 50. Interest on delayed payment of tax- (1) Every person who is liable to pay tax in accordance with the provisions of this Act or the rules made there under, but fails to pay the tax or any part thereof to the Government within the period prescribed, shall for the period for which the tax or any part thereof remains unpaid, pay, on his own, interest at such rate, not exceeding eighteen per cent., as may be notified by the Government on the recommendations of the Council.

Order by the High Court :-
After considering the various provisions under the GST law, the court observed and held as under
Until a return is filed as self-assessed, no entitlement to credit and no actual entry of credit in the electronic credit ledger takes place. As a consequence, no payment can be made from out of such a credit entry. It is true that the tax paid on the inputs charged on any supply of goods and/services, is always available. But, it is available in the air or cloud. Just as information is available in the server and it gets displayed on the screens of our computers only after connectivity is established, the tax already paid on the inputs, is available in the cloud. Such tax becomes an in-put tax credit only when a claim is made in the returns filed as self-assessed. It is only after a claim is made in the return that the same gets credited in the electronic credit ledger. It is only after a credit is entered in the electronic credit ledger that payment could be made, even though the payment is only by way of paper entries.

As a consequence, the payment of the tax liability, partly in cash and partly in the form of claim for ITC was made beyond the period prescribed. Therefore, the liability to pay interest on gross amount arose automatically. The petitioner cannot, therefore, escape from this liability.

Comments :-
This is an important judgement as the court has determined the tax paid on inputs shall be considered as input tax credit only when the returns are filed.

Though the GST council had previously recommended levy of interest on net tax liability after taking into consideration admissible ITC, the amendment to that effect has not been given effect in the GST law.

One Stop Destination for everything GST