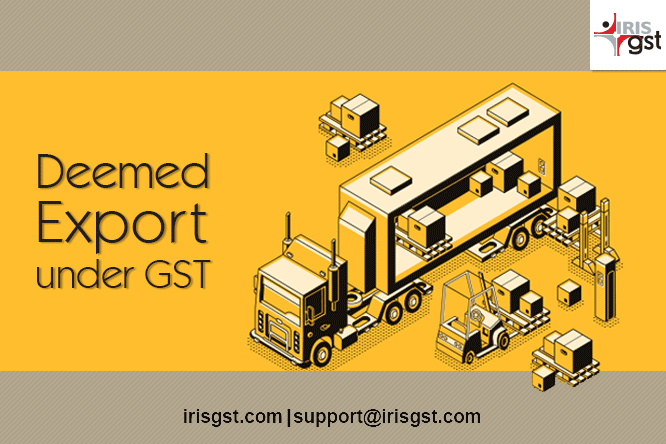 The process of supplying the goods (produced/manufactured in the country) on an international scale is known as Export. Such supply of goods and service contribute to the growth of an economy and thus enjoy the perk of being treated as zero-rated supplies. However, there is a certain category of supplies, as notified by the Central Government, wherein the supply is treated as an export, even if the goods do not leave the national borders. Such supply of goods is known as Deemed Exports under GST.

To understand it better, let us instance a Mr A, a registered dealer in Maharashtra who supplies his goods to an EOU dealer, who further sells the received goods to his customer in the UK. In the given instance, the supply of goods from Mr A to the EOU is considered as Deemed export, while the supply of goods from EOU to his customer is an Export.

For a supply of goods to be considered as Deemed Export, the dealer is required to make a note of the follows:

What supplies are notified as Deemed Exports?

As per Notification No. 48/2017 – Central Tax dated 18 October 2017 has notified the following supply of goods as deemed exports:

Additional conditions to be fulfilled by EOU/STP/HTP

Why do I have to pay tax on the supply of Deemed Exports?

Although deemed exports are to be treated similar to exports, these supplies are not zero-rated supplies by default. Thus, GST shall be applicable on all the deemed export at the point of supply. Furthermore, these Supplies cannot be made under Bond / LUT without payment of tax.

However, the supplier or the recipient of the goods can claim a refund on the tax paid on such supply. But once the refund has been claimed, the recipient will not be able to claim the ITC on the same.

How can I claim a refund on the tax paid on Deemed Exports?

IRIS Sapphire, a premium GST compliance solution from the house of IRIS GST (GSP) is designed to make your return preparation and filing process easy and efficient. For any queries or to book your free demo, kindly connect with us at support@irisgst.com