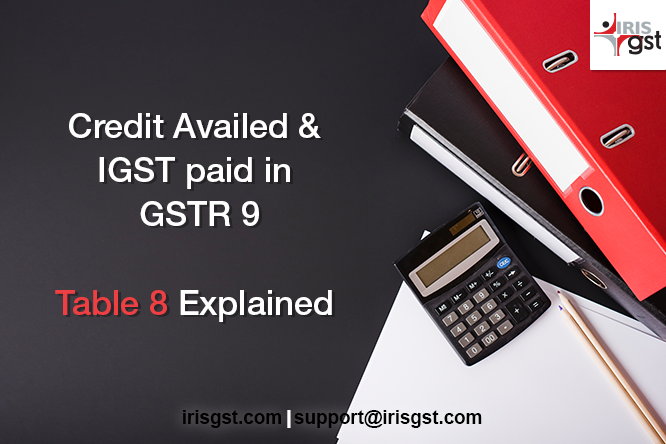 For all the updates regarding GSTR 9 Due-date extension, please refer to this article: FAQs Around GST Annual Return

Table 8 of the annual return form GSTR 9 contains two sections.
The first section relates to the comparison of credit availed on forward charge by the taxpayer with the credit available as per inward supply uploaded by the suppliers in GSTR 1, duly reflected in GSTR 2A (Clause A to F of Sl. No.8).

Clause A of Sl. No.8: ITC as per GSTR-2A (Table 3 & 5 thereof)
Clause A of Sl. No.8 is an auto-populated detail. The value of supplies along with relevant nature and amount of tax shall be auto-populated from Table 3 and 5 of Form GSTR-2A. Table 3 of GSTR 2A relates to ‘inward supplies received from a registered person other than the supplies attracting reverse charge’. Table 5 of GSTR 2A relates to ‘Debit/ Credit notes received during the current tax period’. Thus, what is auto-populated from GSTR 2A into this clause is only the data relating to credit availed on inward supplies, where GST is paid to suppliers and amendments made thereto in the form of debit/ credit notes.

It is important to note that Table 8A of the annual returns is auto-populated from FORM GSTR-2A as on 1st May 2019.

Verification of GSTR 2A may bring forth the following discrepancies:
Unknown purchases

Clause B of Sl. No. 6 of GSTR-9 captures input tax credit pertaining to Inward Supplies (other than imports and inward supplies on which tax is to be paid on reverse charge but Includes services received from SEZ).

Clause H of Sl. No.6 relates to the aggregate value of input tax credit availed, reversed and reclaimed under the provisions of the GST Act, 2017. Hence credit reclaimed/ re-availed as per 2nd proviso to section 16(2) of CGST/ SGST Act, 2017 should be reflected here. Credit availed, reversed and reclaimed pursuant to Rule 42(2)(b) of CGST/ SGST Rules, 2017 also must be entered here.

Sl. No. 8C: ITC on inward supplies (other than imports and inward supplies liable to reverse charge but includes services received from SEZs) received during 2017-18 but availed between April 2018 and March 2019.

The values entered under this clause are required to be extracted from Table 4(A)(5) of GSTR 3B for April 2018 to March 2019. The values forming part of this clause must also form part of Sl. No 13 (Pt. V  of GSTR 9) –‘ITC availed for the previous financial year’. Since Pt. V of GSTR 9 provides for ‘Particulars of the transaction for the previous financial year, declared in returns of April to September of the current financial year or up to  the date of filing annual return, whichever is earlier’, this clause, as reflected in Sl. No.13 may be treated as an exceptional item by the revenue. The registered the person will be called upon to substantiate the data entered in Point No. 13, since it leads to a reduction in tax liability. Since data entered in Point No.13 ought to match with data entered in Point No. 8C, the registered person  ought to have a working sheet with invoice wise line item wise data.

Sl. No.8D: Difference [8A-(8B+8C)]
Ideally, the value in this clause ought to be positive, since all inward supplies as reported in GSTR 2A may not be an eligible input tax credit. In the majority of circumstances, GSTR 2A will also contain blocked credit under section 17(5) and non-business credits under section 17(1), in addition to eligible credit. There could be credits used exclusively/ partially for exempt supplies, which will have to be dealt as per section 17(2), (3) of CGST Act, 2017 r/w Rule 42 and Rule 43 of CGST Rules, 2017. Hence this clause ought to generally declare a positive value.

However, in case this clause derives a negative value, it could point to the fact that ITC has been availed by the recipient, but the supplier has failed to upload the invoices in his GSTR 1, leading to the absence of corresponding credits and values in GSTR 2A of the registered person.

Negative values in this clause, in exceptional circumstances, could indicate errors or omissions/ commissions in the form of availing credit twice, availing excess credits due to typographic errors.

Sl. No. 8F: ITC available but ineligible (out of 8D)
This clause has been inserted in the annual return to report that portion of input tax credit availed on forward charge, which is ineligible to be taken as credit due to provisions of section 17 of CGST Act, 2017 read with Rule 39 and 42 of CGST Rules, 2017.

There could be cases where the registered person has uploaded only the eligible credit in Form GSTR 3B and completely omitted to enter ineligible credit in Table 4(D) of GSTR 3B for the period July 2017 to March 2018. In such cases, the information will have to be procured from books of accounts and entered here notwithstanding the fact that the said values are not entered in GSTR 3B since GSTR 2A will include all inward supplies including ineligible credit.

Sl. No. 8G: IGST paid on import of goods (including supplies from SEZ)

IGST paid on import of goods as well as IGST paid on inward supplies from SEZ Unit shall be captured in this clause.

Supplies of goods or services or both to or by an SEZ unit or SEZ developer is treated as an inter-State supply as per section 7(5) of IGST Act, 2017. Hence, supplies from the SEZ unit/ developer to DTA would be liable to IGST. Further as per section 30 of SEZ Act, 2005 any goods removed from SEZ to Developer ‘shall be chargeable to customs duty’, as leviable on such goods when imported.

Hence supplies by SEZ to DTA would be chargeable to IGST, as leviable when goods are imported into India. Hence this clause contains not only IGST paid on import of goods but also inward supplies from SEZ.

Sl. No. 8H: IGST credit availed on import of goods (as per 6E) above
IGST credit on import of goods including supplies from SEZ is reflected in 6E of GSTR 9. The data entered in 6E of GSTR 9 is auto-populated into 8H of GSTR 9. 6E is bifurcated in IGST paid on inputs and capital goods. The aggregate of IGST paid on inputs and capital goods are aggregated and auto-populated into 8H.

It has been clarified by CBIC via press release In respect of the imports during FY 2017-18 for which ITC was availed during Apr’18 to Mar’19, ITC shall be disclosed in Table 6(E) of Form GSTR-9.

Credit may not be available on import of the following goods:

This is merely an aggregate of total credit lapsed in 8E, 8F and 8J.

IRIS Sapphire is a GST Compliance Solution from the house of IRIS GST. IRIS Sapphire offers you features such as Smart and Advanced reconciliation for your annual returns, Insights and reports to help you with your business management and a team of experienced customer support to help you at every hurdle of your compliance journey.

For any queries or to book your free demo with IRIS Sapphire, connect with us at support@irisgst.com.

There are 8 comments on this post
Leave a reply