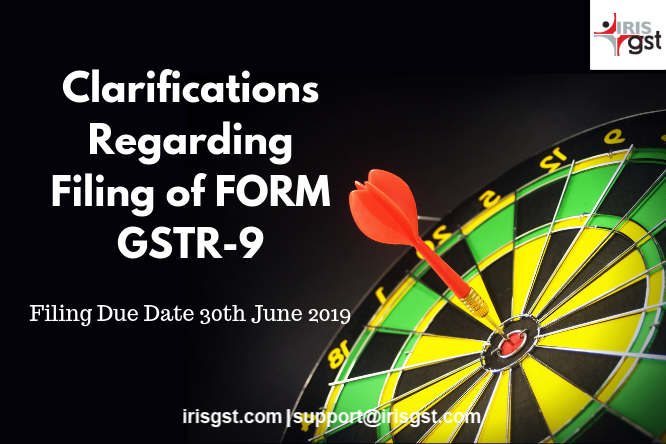 For all the updates regarding GSTR 9 Due-date extension, please refer to this article: FAQs Around GST Annual Return.

The Annual Return in the form GSTR-9 for FY 2017-18 is to be filed by 30th June 2019. However, there have been many inconsistencies in the form requiring suitable amendment therein.

One important step taken by the CBIC to remove various confusions as existed in the form.

We have summarised below the clarifications in the sequence in which they appear in the said form for better understanding.

1) In Part II of Form GSTR-9 only the following transactions will be disclosed,

a) Transactions in respect of which the tax is paid in Form GSTR-3B for the period Jul ’17 to Mar ’18 (irrespective of when such transaction was disclosed in Form GSTR1), [point ‘d’ of press release] or

b) Any additional outward supply not declared in Form GSTR-1 and GSTR-3B to be disclosed in the Part II. However, tax element in respect of these transactions shall be declared in Part IV in ‘Tax Payable’ and the differential tax shall be paid vide DRC-03. [point ‘e’ of press rlease]

Comment :– There are instances where there are differences between the details auto-populated in Table 4 of Form GSTR-9 and the actual entry in the books of accounts or returns. It is clarified that Table-4 can be altered by the taxpayer reflecting the actual tax paid as per returns / DRC-03 and auto-population is only a functionality provided to the taxpayer.

ITC in Form GSTR-2A as on 1st May’19 will be considered for auto-population in Table 8A of Form GSTR-9.


Comments :– Till now there have been doubts regarding the date up to which the data from Form GSTR-2A would be populated to Form GSTR-9. Now it has been clarified that such date would be 1st May ’19. However, it has to be noted that ITC relating to supply made during FY 2017-18 that was availed after due date of Sep ’18 return, would be eligible only if it is disclosed by the supplier in their GSTR-1 upto the month of March 2019. Considering that the due date of filing of GSTR-1 for March month was 13th April for regular return filers and 30th April for the quarterly return filer, 2A has been made available till 1.5.2019 so that the person filing the GSTR-9 could reconcile the credit appearing in 2A till said date with the credit availed in GSTR-3B.

Comments :– This has been done in light of ROD 02/2018 which has extended the time limit to avail ITC by the due date of filing of return for March 2019 as against original due date of September month return.

Comments: This will result in difference in table 6J of the form, as the figure reported in table 6A would be the ITC that has been availed during FY 2017-18. Suitable amendments should be made in the instructions to the form and the description of the entry 6E in the form.

Part V of the Form GSTR-9 shall have details of transactions (both outward supply and ITC) relating to FY 2017-18 that were declared in the returns between Apr ’18 to Mar ’19, including the amendments furnished in Table 10 and 11 of Form GSTR-1.

comments: This has been done in light of ROD 02/2018 which has extended the time limit to avail ITC and to declare outward supply details in Form GSTR-1. Further the form online also has made changes to the heading in Part V to indicate that the transactions disclosed during FY 2018-19 shall be declared.

1) Wherever there is conflict between GSTR-3B and GSTR-1 for the outward supply, the disclosure made in the GSTR-3B would prevail considering that the tax has been paid through GSTR-3B.
2) The sequencing for arriving at the value of outward supply for disclosure in the GSTR-9 would be as below:

a) Identify actual supply made as per books of account. This should come in the GSTR9 by disclosing in the appropriate tables.
b) Ensure that such supplies have been disclosed and taxes thereon have been paid in the GSTR-3B. Disclose in GSTR-9 as per below:
i) If supplies and taxes declared and paid till March 2018 – show in Part II of the GSTR-9.
ii) If supplies and taxes declared and paid between April 2018 to March 2019 – Disclose in Part V of GSTR-9.
iii) If not disclosed in GSTR-3B at all- disclose the value of supply in the Part II, tax payable on such supply in Part IV  and pay taxes through DRC-03.

3) Detailed break up (B2C, B2B, exports etc.) of above supplies to be taken as per GSTR-1 if it is in sync with the GSTR-3B. If GSTR-1 has incorrect reporting, it may be ignored.
4) Wherever additional disclosure is made in Part II and taxes thereon is paid through DRC-03, such details should be disclosed in GSTR-9C i.e. Supply declared in the GSTR-3B during the year was Rs. 1,000/- on which tax payable and paid (by utilising ITC and cash payment) was Rs. 180. Now additional supply of Rs. 200 is shown in part II on which Rs. 36 is tax payable. Such differential tax is paid through DRC-03 but there is no place in the GSTR-9 to disclose the fact of payment of tax through DRC-03. Hence, the fact of payment of tax should be shown in the GSTR-9C by the auditor.

In order to avoid last minute, the CBIC has also requested all the taxpayers to file their Annual Return (FORM GSTR-9) at the earliest.

IRIS Sapphire is a GST Compliance Solution from the house of IRIS GST. IRIS Sapphire offers you features such as Smart and Advanced reconciliation for your annual returns, Insights and reports to help you with your business management and a team of experienced customer support to help you at every hurdle of your compliance journey.

For any queries or to book your free demo with IRIS Sapphire, connect with us at support@irisgst.com.