GSTR 9
Necessary actions to be taken for GSTR 9 and GSTR 9C – CBIC Press Release
by Manoj Jain in GSTR 9
Publish on July 8th, 2019 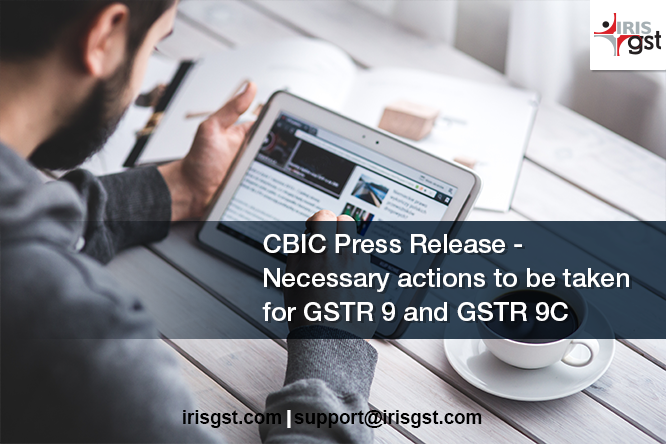 For all the updates regarding GSTR 9 Due-date extension, please refer to this article: FAQs Around GST Annual Return

Although the due date to file the annual return forms has been extended to August 31, 2019, the confusion among the taxpayers is yet to be settled. In order to solve the same, the following clarification was released by the CBIC for the Annual Return forms – GSTR-9 / GSTR-9A and the Reconciliation Statement – Form GSTR-9C.

1. Clarification on Excess ITC in GSTR 2A:

There appears to be some confusion regarding the declaration of the input tax credit in Table 8 of the annual return. The input tax credit, which is declared/computed in Table 8D is the credit that was available to a taxpayer in his FORM GSTR-2A but was not availed by him between July 2017 to March 2019. The deadline has already passed and the taxpayer cannot avail such credit now. There is no question of lapsing of any such credit since this credit never entered the electronic credit ledger of any taxpayer. Therefore, taxpayers need not be concerned about the Positive values reflected in this table 8D. This is merely information that the Government needs for settlement purposes.

Many taxpayers have requested for clarification on the appropriate column or table in which tax which was to be paid on reverse charge basis for the FY 2017-18 but was paid during FY 2018-19. It may be noted that since the payment was made during FY 2018-19, the input tax credit on such payment of tax would have been availed in FY 2018-19 only.
Therefore, such details will not be declared in the annual return for the FY 2017-18 and will be declared in the annual return for FY 2018-19. If there are any variations in the calculation of turnover on account of this adjustment, the same may be reported with reasons in the reconciliation statement (FORM GSTR-9C).

4. Reporting of ITC on Imports:

In the press release on annual return issued earlier on 4th June 2019, it has already been clarified that all credit of IGST paid at the time of imports between July 2017 to March 2019 may be declared in Table 6E. If the same is done properly by a taxpayer, then Table 8I and 8J shall contain information on credit which was available to the taxpayer and the taxpayer chose not to avail the same. The deadline has already passed and the taxpayer cannot avail such credit now.

There is no question of lapsing of any such credit since this credit never entered the electronic credit ledger of any taxpayer. Therefore, taxpayers need not be concerned about the values reflected in this table 8J. This is information that the Government needs for settlement purposes.

It has been represented by various trade bodies/associations that there appears to be some confusion over what values are to be entered in Table 5D, 5E and 5F of FORM GSTR-9. Since, there is some overlap between supplies that are classifiable as exempted and nil rated and since there is no tax payable on such supplies, if there is a reasonable/explainable overlap of the information reported across these tables, such overlap will not be viewed adversely.

6. Clarification on Reporting of No Supply /Non-GST Supply

The other concern raised by taxpayers is the inclusion of no supply in the category of Non-GST supplies in Table 5F. For the purposes of reporting, non-GST supplies include supply of alcoholic liquor for human consumption, motor spirit (commonly known as petrol), high-speed diesel, aviation turbine fuel, petroleum crude and natural gas and transactions specified in Schedule III of the CGST Act.

7. No Penalty for Payment of any unpaid tax:

Section 73 of the CGST Act provides a unique opportunity of self – correction to all taxpayers i.e. if a taxpayer has not paid, short paid or has erroneously obtained/been granted refund or has wrongly availed or utilized input tax credit then before the service of a notice by any tax authority, the taxpayer may pay the amount of tax with interest.

In such cases, no penalty shall be leviable on such taxpayer, thus, in cases where some information has not been furnished in the statement of outward supplies in FORM GSTR-1 or in the regular returns in FORM GSTR-3B, such taxpayers may pay the tax with interest through FORM GST DRC-03 at any time. In fact, the annual return provides an additional opportunity for such taxpayers to declare the summary of supply against which payment of tax is made.

8. Unpaid Tax to be Deposited & Excess Tax Paid to be Refunded

If the same does not match, there can be broadly two scenarios, either tax was not paid to the Government or tax was paid in excess. In the first case, the same shall be declared in the annual return and tax should be paid and in the latter, all information may be declared in the annual return and refund (if eligible) may be applied through FORM GST RFD-01A

9. ITC can’t be availed or reversed through Annual Return:

No input tax credit can be reversed or availed through the annual return. If taxpayers find themselves liable for reversing any input tax credit, they may do the same through FORM GST DRC-03 separately. Thus, GSTR 9 doesn’t have any impact on Credit Ledger.

There have been a number of representations regarding non-availability of information in Table 16A (Supply from Composition Dealer) or Table 18 (HSN Wise Summary of Inward Supply) of Annual return in FORM GSTR-9. It has been observed that smaller taxpayers are facing a lot of challenges in reporting information that was not being explicitly reported in their regular statement/returns (FORM GSTR-1 and FORM GSTR-3B).

Therefore, taxpayers are advised to declare all such data /details (which are not part of their regular statement/returns) to the best of their knowledge and records. This data is only for information purposes and reasonable/explainable variations in the information reported in these tables will not be viewed adversely.

11. Role of a chartered accountant or a cost accountant in certifying reconciliation statement:

There are apprehensions that the chartered accountant or cost accountant may go beyond the books of account in their recommendations under FORM GSTR-9C. The GST Act is clear in this regard. With respect to the reconciliation statement, their role is limited to reconciling the values declared in annual return (FORM GSTR-9) with the audited annual accounts of the taxpayer.

12. Turnover for eligibility of filing of reconciliation statement:

It may be noted that no credit note which has a tax implication can be issued after the month of
September 2018 for any supply pertaining to FY 2017-18; a financial/commercial credit note can, however, be issued. If the credit or debit note for any supply was issued and declared in returns of FY 2018-19 and the provision for the same has been made in the books of accounts for FY 2017-18, the same shall be declared in Pt. V of the annual return.

14. Duplication of information in Table 6B and 6H:

Many taxpayers have represented about duplication of information in Table 6B and 6H of the annual return. It may be noted that the label in Table 6H clearly states that information declared in Table 6H is exclusive of Table 6B. Therefore, information of such input tax credit is to be declared in one of the rows only.