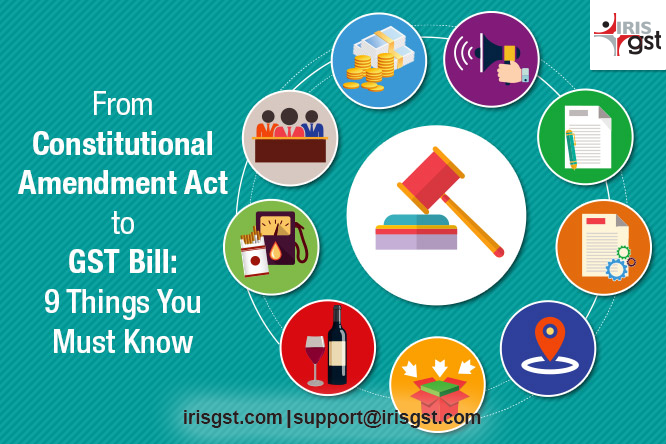 The government is on a war footing to push the passage of the Goods and Services Tax (GST) in this Parliament session. And as we look forward to the GST becoming a reality, this article will help you understand the fundamentals that go into shaping the GST Bill: The Constitutional Amendment Act (CAA).

The GST, which has been a hot topic of discussion for a while now, is a unified approach to taxation. It provides a simplified way of indirect taxation, and hence has been accepted by many countries around the world. However, the Indian Constitution did not initially provide for a parallel levy of indirect taxes by the Centre and States–a pre-requisite for GST.

CAA is the very first step in adopting GST. Let us understand some key facets of the CAA in detail:

The CAA enables the Centre and State Governments (including Union Territories) to introduce a law for levying GST on supply of goods or services or both. In the GST regime, there will be one CGST law and one SGST law each for the States (and a corresponding UTGST for Union Territories).

The GST will be applicable on both, goods and services (including work contracts). As GST is applicable on ‘supply’, previously taxable events such as ‘manufacture’, ‘sale’, ‘provision of services’ etc. will lose their relevance. We should note, however, that the term ‘supply’ is not defined or elaborated or qualified (such as supply for a consideration etc.). But, as per the revised GST law, supply with consideration will attract GST (unless covered under Schedule I of revised GST law).

The CAA specifically provides that ‘services’ means anything other than goods. This broad definition of the term ‘service’ will remove any disputes on classification of goods or services (unless the government proposes different rates for GST on goods or services or both).

5. Import of Goods or Services

It appears that ‘alcohol for human consumption’ will be kept outside the GST regime. Since this is the only item mentioned as an exception, we can assume that that all other sectors / goods are intended to be included within GST.

This impacts alcohol manufactures negatively, since companies manufacturing alcohol may not be in a position to avail the credit of GST paid by them on their procurements.

8. Role of the GST Council

The CAA is silent on key aspects of the GST such as:

To address some of these issues, the ‘GST Council’ was formulated consisting of The Union Finance Minister (as Chairman), The Union Minister of State in charge of Revenue or Finance, and The Minister in charge of Finance or Taxation or any other Minister, nominated by each state government.

The GST Council has also been given the authority to determine the modalities of resolving disputes arising out of its recommendations.

With the GST looking like a very real possibility, the CAA acts as the guiding light for all the rules under the bill. Hence understanding the CAA becomes important for every taxpayer.

You may read our earlier articles on Understanding the GST in 5 Simple Ways and Action Plan to Get GST Ready to help you define your GST strategy.

IRIS has been in the compliance space for over 2 decades, having worked with regulators and filing entities alike. On one hand, our solutions power the likes of the Reserve Bank of India and ACRA, Singapore on the regulatory side, and on the other, we support over 700 Indian corporates to meet their MCA filing requirements. As an empanelled GST Suvidha Provider, we are now applying our deep expertise in compliance to develop IRIS GST, a highly reliable and scalable solution to meet your GST compliance requirements.

Please contact us, In the meanwhile, if you have any queries, you can reach out to me at support@irisgst.com.