GST Updates
7 Key Things on GST from the Economic Survey 2016-17
by Pritam Mahure in GST Updates
Publish on February 1st, 2017 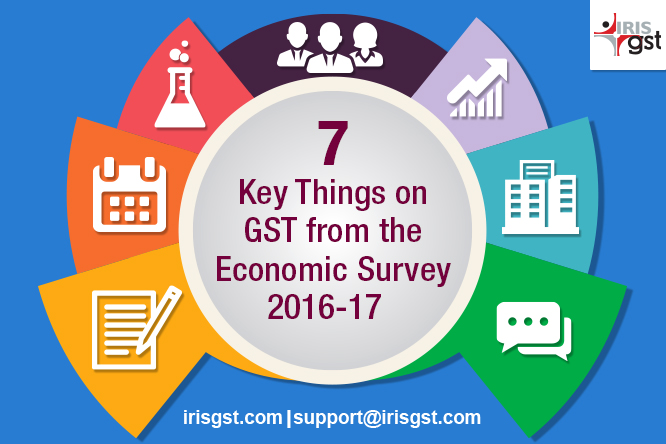 With these two events as the background, the ES discusses in detail the impact of GST on growth and tax revenues.

Key points that the Survey highlights regarding the GST:

The ES also highlights that in the last six months, the government has secured passage of major measures such as the Aadhaar Bill, the Bankruptcy Code, and the GST constitutional amendment.

2. Possible date of GST introduction and its benefits

The ES does not specify a likely date of introduction of the GST but does mention that GST will probably be implemented “later in the fiscal year”.

The Survey also concedes that the fiscal gains from implementing the GST and demonetisation, while almost certain to occur, will probably take time to be fully realized. This is possibly because of the fact that transition to the GST is so complicated from an administrative and technology perspective, that revenue collection will take some time to reach full potential.

3. GST is a bold new experiment

The ES mentions that GST is a bold new experiment in the governance of India’s cooperative federalism as is based on a novel source of Big Data – Invoice level transactions from the Goods and Services Tax Network (GSTN).

The Survey mentions that the GST has the potential to create a common Indian market, improve tax compliance and governance, and boost investment and growth. GST may also improve revenue collection through increased compliance, competitive enhancement benefits and other channels

The ES also indicates that in the backdrop of demonetisation, appropriate steps should be taken to  speed up growth in 2017-18 such as fast, demand-driven, ‘remonetisation’; further tax reforms, including bringing land and real estate into the GST, reducing tax rates and stamp duties; and acting to allay anxieties about over-zealous tax administration.

5. How will GST impact real estate?

The Survey indicates that the prices of real estate could fall further as investing undeclared income in real estate will become more difficult. However, it also points out that the tax component could rise, especially if GST is imposed on real estate. The ES also states that GST should be implemented with a broader coverage to include activities that are sources of black money creation such as land and other immovable property transactions.

6. How should the tax administrators take advantage of GST?

At a time when the GST promises to provide so much more data on individual transactions, greater information sharing between the direct and indirect tax departments at the Centre, along with coordination with the states, could lead to greater compliance through non-punitive means, not just in relation to indirect but also direct tax collections. Big Data and the digital age, and the promise they offer, should also be embraced by the tax administration.

The Survey underlines that the introduction of the Goods and Service Tax offers an excellent opportunity to rationalize domestic indirect taxes, and that it should therefore not discriminate in the case of apparels, against the production of clothing that uses man-made fibers; and in the case of footwear, against the production of non-leather based footwear.  The Economic Survey expects that the GST will iron out oddities and normalize interstate trade.

The Economic Survey 2016-17 lays much emphasis on the GST and with only five months to go before July 1, 2017 (the possible date of introduction of GST), the industry eagerly awaits a detailed roadmap for GST in the Union Budget 2017.